Well, it was a Saturday – what did you expect?

I woke up really early yet again (I need to find a way to relay and calm down soon), and started writing pretty soon after waking up. Which was very good.

And then I realized that I was stuck on the novel. I deleted a paragraph, ended up with 75 words and realized that writing wouldn’t happen.

I got up, I did not meditate, I skipped my run for a bike ride and went to Munich to get a new battery put into my phone. The bike ride was wonderful: 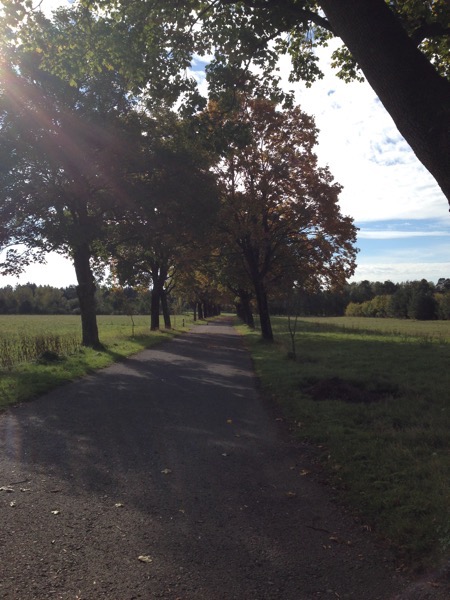 When I arrived at the phone repair shop there was a sign outside saying, on Saturdays repairs are only by appointment. Ouch. Twenty years earlier I would have left immediately but since the shop was completely empty of customers I decided to try it anyway. I went in, said hello and said, „I just saw that I would have needed an appointment,“ and the guy behind the counter said, „You’re in luck, the next appointment isn’t due until eleven.“ So there were fifteen minutes left until then and he decided to repair my phone until then.

I was fully prepared to wait for hours, so I had my ebook reader and my knitting. The day was sunny and warm and I sat down on a bench in a really nice place in Pasing. Unfortunately, I can’t show you a picture because I didn’t have my phone with me.

When I came back at eleven as he had told me the shop was closed with a sign on the door saying, ‚back in five minutes, thank you for your patience‘. I wasn’t all that patient but decided to not mind because, well, I would have a working phone again soon.

He came back, running towards me (not a sporty guy) with something small and white in his hand. I bet that he had realized that he had run out of parts and had to restock right in the middle of his work day. (Note to every retail business owner out there: closing your shop with a ‚back in 5 minutes‘-sign in the middle of the day does not look professional.) He said, „You must be the 11 o’ clock-appointment with the iPhone 8!“ Um, no. I was the one before that who gave him my phone just fifteen minutes earlier

I did get my phone back right away, though, and it is working again, so I won’t complain. I have no idea why getting my phone repaired at his shop costs 95 cents more than the pricing list on his website says but again – I won’t complain. Not even for having to wait for two minutes for him. At the time that he told me to be back and was expecting his next customer.

The phone looks like it was never opened and the new battery seems to be in good working order (I checked with an app on my computer) so everything is fine.

I rode my bike back home again, I think I was gone for a total of 75 minutes or so. With two thirty-minute bike rides thrown in.

When I came back home my husband was sure that I couldn’t have had success. Ha!

We made tagliatelle gorgonzola for lunch (with salad mostly from the garden): 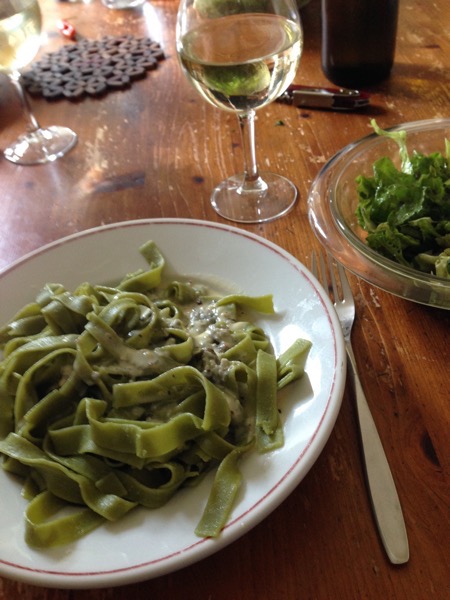 While cooking my husband realized that we were out of white wine, so I went out and got some. At the end of lunchtime I reminded the boy of his dooming geography test and we all realized that he couldn’t name the 16 German states. We also realized that none of us could. So we proceeded to learn them. And their capitals. Interestingly, the boy took the longest to memorize them. He also declared that kind of knowledge superfluous and unnecessary. Those two things might be related.

After lunch I sat and read and ate some chocolate. And then I did all the dishes by myself.

Then I let the Saturday slump hit me. I started watching a video that had been in my open tabs for weeks. I read a new book. I bought another book. I had a discussion with my sister on twitter.

Decided that one hour was not enough time to start anything and read a book on attitude about writing. (I totally agreed with the ‚all hard work all the time‘-premise. In theory.)

Then I had to wait for the boy for fifteen minutes until he realized that he had forgotten out six o’clock Star Trek date.

We ended up watching two episodes of ‚DS9‘ (both of which were excellent, as usual) because we didn’t want to cut a double episode of TNG down the middle. My husband could barely tear himself away from the screen to practice drums. But he did.

I was really, really hungry after that so I ate a late dinner, started writing this post and then I kicked my butt and spent my minimum twenty minutes writing.

Today there will be yoga and all the things I didn’t do yesterday. Like writing the newsletter and writing more words and making music and all.the.things.

In other words – just a regular Sunday.