I woke up really, really early, like 4.15 or so. I spent half an hour in denial but couldn’t sleep. I need to calm down again because this is not sustainable. I mean, calm down in my head. The things I actually do don’t feel like they drain my energy, it’s mostly the things I don’t get done.

I did write first thing again, and second thing, and then I got up and made breakfast. My husband got his muesli as he wanted, thawed blueberries and all. We had a nice leisurely conversation. And then I started procrastinating. I was tired and felt a little down from doing so many thing the days before and my to-do list weighed on me. I did get a grip soon afterwards but I lost the time I would have needed to take a shower.

I did the weekly cleaning and made pizza from scratch and even started doing the first batch of dishes while the pizza was in the oven. I must have touched the weird control panel on the oven while doing that so it was set to quick heat. Which led to the pizza being, um, extra-crispy: 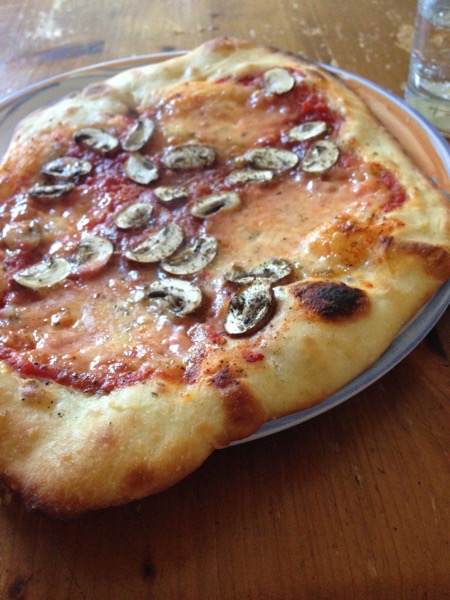 It tasted great, by the way.

I was also thrown off because the day before I had realized that my cell phone’s battery is failing. I don’t really want to spend money on a new cell phone right now but I also don’t want to go without. I found a place online that only charges 30 Euros for battery replacement but that would mean going without it for at least five days. The boy will be traveling next week and I don’t want to risk being without a phone while he is away.

I did look at new phones. Nice cell phones are expensive is all I can say.

But then I remembered that there is a place that does these repairs in Munich, not far from me. Well, about forty minutes by bike. Or twenty minutes by train but the bike ride is not only cheaper it is also a very nice ride through fields and woods and exercise is always a good thing.

So after giving the whole thing a lot of thought in the course of the afternoon I decided that I’ll change my run for a bike ride today and see if the guy in Munich can put a new battery in my phone right away. Maybe I’ll call beforehand. I’ll see.

So. I did all the dishes right after lunch, put on makeup, practiced singing and piano, announced the new podcast episode everywhere, and then I taught one student after the other for 3 1/2 hours.

Then the boy and I watched some Star Trek. He apparently had a great need to talk which resulted in us stopping Netflix all the time in order to look up things online and talk about them. Not the most immersive of experiences.

Then my husband was finally done with teaching and I got ready for bed, wrote in my journal, made a list for today and went to bed just in time.

Today there will be a bike ride to Munich, and some music, and hopefully a lot of writing and my husband and I have scheduled a meeting (I bet he already forgot but it’s in my journal) because we need more photos and copy for the teaching website and material for a flyer. He says he already wrote things down so that is good. It is funny, I am the one who wants to be a writer but he is much better at copywriting than me. I never agree with the way he phrases things but when he gives me his stuff I then can go and make it pretty. When I have to write anything even remotely ad-related I freeze. Most of the time I can’t even write my own bio for things.

If I found time to sew a bit as well as do all the other things that would be the cherry on top but I seriously doubt it. Today is a day where my usual Saturday slump would be deadly. Well, not literally, of course.

But I’d really like a Saturday without slump for a change. And a Sunday as well.