In other words a very good day.

I got all fed up by my own whining and also motivated by reading Kristine Kathryn Rusch’s book about time management (if you like any advice about freelancing I heartily recommend also the whole Freelancer’s Guide that she wrote; the time management book is a part of it) and all this not getting things moving fast enough is making me tense, so I woke up rather early and for once I actually started writing almost right away. Well, first I had to write the blog post. And then I did two 25-minute segments.

As usual the first one only yielded a rather meager word count but for once I decided that I was okay with that. That a few words are better than no words. And I knew that the rest of the day would be packed.

There was breakfast. I actually managed to mess up my husband’s breakfast for the second time in a row. He alternates between muesli and bread/pastries. When he eats muesli I put some frozen blueberries in his bowl when I get up so that they are thawed before he eats them. On bread or pastry days I make sure that there is something for him to eat. The bread situation here can be precarious with a teenager addicted to carbs eating sandwiches for dinner without thinking about the next day.

So. Yesterday was muesli day. But also a holiday. Which threw me off. So I set my husband’s muesli bowl on the table but there were no blueberries in there. He ended up with lukewarm tea from the day before and bread for breakfast. Today I had a nice bowl sitting there for him again, this time with the blueberries all warm and thawed. When he showed up and reminded me that it was not muesli-day I said I was sorry and that I would just eat the blueberries the following morning.

But then it turned out that there wasn’t any bread. The night before I had assessed the bread situation and decided that there was enough for the boy’s breakfast and his school snack. So he ate it all. And my husband had to eat muesli after all with coffee. He doesn’t really like coffee and muesli, he usually drinks tea with that.

So I seem to have been slightly confused.

I did ask what he wanted for breakfast for today, by the way, and got an indignant, „Muesli, of course, because it’s Friday“ back. I set the bowl on the table last night. Wish me luck.

After the whole breakfast situation we had a very interesting conversation about life and music and recordings and art and discipline, as one does.

Then I rushed off for a quick grocery run, and then to the optician. I have now ordered some more test contact lenses and have informed the optician that I might order a pair of new reading glasses as well. The whole setup is getting more and more complicated. Funny, but he is always really nice to me. (Two pairs of really expensive progressives because I am so nearsighted, contact lenses, the sunglass-clip and probably another pair of reading glasses (not as expensive)).

Then I went back home and for once did almost nothing to help with lunch. It was chili day again: 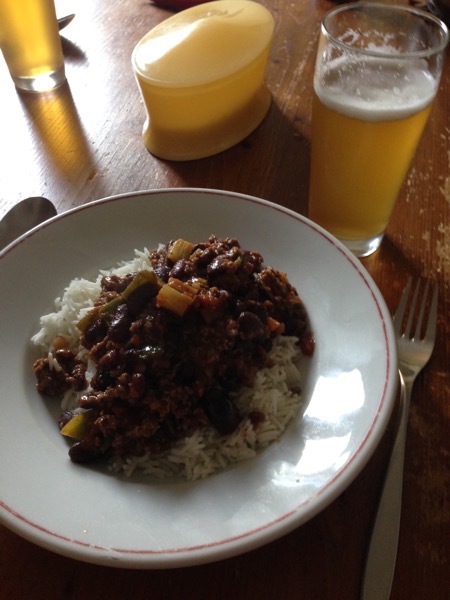 Then I decided not to waste half the afternoon and got the podcast ready for publication. I also practiced singing and piano for ten minutes each and then it was time to teach.

Teaching went on until seven, then I said hello to the rest of the family again, applauded the boy for writing two excellent tests (an A in math which is laudable, and a B- in Latin which is incredible and unheard of; seems he got lucky).

Did the dishes that I had left sitting after lunch, made pizza dough, decided to stick it in the fridge instead of letting it sit on the counter, began this post, and decided that I was too tired to write some more. I’m still hoping to finish the current novel until the beginning of November. That would mean writing 3,000 words per day, though. That might be a little tricky.

Went to bed early which is perfectly okay if you woke up at 5.15 and started writing at 5.30.

Today there will be the weekly cleaning, I will make pizza, write some more, teach a lot of students, take some pictures for the music teaching website and publish the podcast.

And then I will start the weekend by watching some Star Trek and crocheting.