I totally forgot that it was 9/11 until someone mentioned it on ravelry. I did sit in silence for a minute then.

Yesterday was all in all a rather good day. I did write for ten minutes first thing in the morning and was reasonably on time for the boy’s first day at school. He was slightly disorganized, he will need some time to get back into his routine.

After breakfast things started spiraling out of control. First I got an email that had me thinking and debating a lot (nothing bad, just something that needs some thought), then the mother of one of my husband’s students called my MIL because our phone seemed to be offline. I zeroed in on the tech problem and found that the problem was with the phone company. We still had internet and we could call people but nobody could reach us and our voice mail was offline. Which is a rather bad thing, especially at the beginning of a school year when a lot of students need to reach us to move lessons around.

My original plan had been to run, take a shower, order a second pair of glasses and go to the health food store. Instead I went to the optician.

I had a long list, I wasn’t sure about the frames I had picked the last time and wanted to order ‚work glasses‘ for teaching and working on the computer and reading, and I also wanted to ask about contact lenses and clip-on sunglasses.

I was lucky and got my favorite optician who answered all my questions and will order the same frame again that I am wearing now, only in a slightly different color. It will be a little more expensive than the one I had originally picked but I like it much better. And it will be for the pair of glasses that I’m wearing the most.

There was still time to go to the health food store. 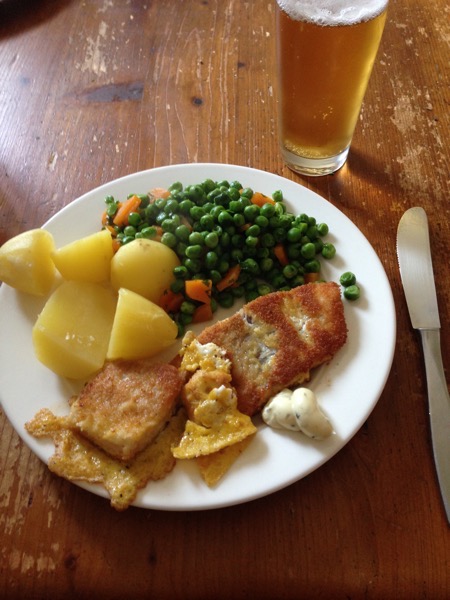 Then I did the dishes and prepared for teaching, taught all my usual students and mostly called it a day. I did write some more and drew my daily bad practice drawing as well.

Today there will be: running and music and writing and teaching. There are several things I could go to tonight but I’ll rather stay at home. I’d like to have more days like yesterday and the day before. Even if they sound boring when I retell them I have made significant progress on some things that are really important to me.

And that makes me feel very happy.

Thank you all for reading this. I hope there are still a few of you left.

I started this exactly a year ago. On September 11th I decided to give daily blogging a try. My goal was always to do it for a whole year. And I did. I know that there is no Day 6 post but you have to believe me that there was and that the blogging software ate it.

I woke up late at 6.30 and had a rather lazy morning. I did manage my ten minutes of writing first thing, so that was good. But I need to speed my morning routine up again starting today because school is on.

I finished knitting the Cria sweater and went for a 6.44k-run: 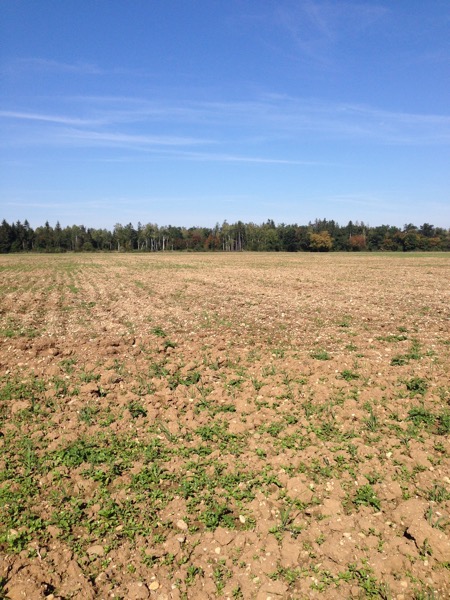 And helped to make chili for lunch and forgot to take the picture before taking the first bite: 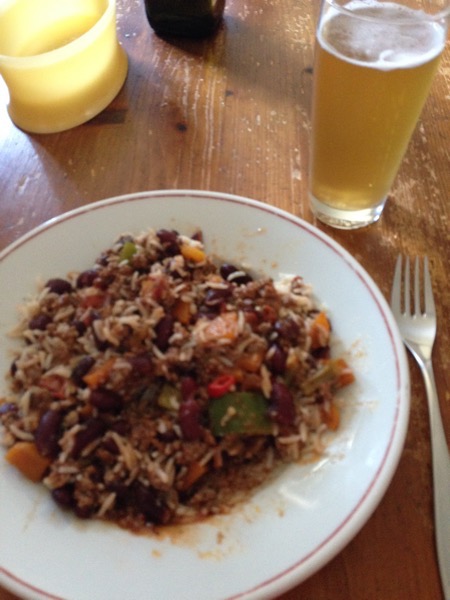 And I wrote an email to our web hosting provider about my husband’s blog and worked on that blog for an hour but finally managed to get it up and going again, yeah!

And I taught four students and did some work on marketing for our music lessons and did a short round of strength training.

The boy and I watched some more Star Trek because it wasn’t exactly a school night for him.

Today will be his first day as a tenth grader and I will run errands and teach and write some more.

And I think I’ll keep on writing here daily for now. It suits me.

I did change my routine for once and wrote for ten minutes first thing in the morning.

My plan was to write like crazy the whole day and finish the novel. Well, let’s say things did not go quite as planned.

I did set up a new bullet journal in the morning. I bought one of the official Leuchtturm bullet journal notebooks and it is nice and hefty but I’m a little unsure about it. Mostly because it’s turquoise. Today when I was carrying it around the house, together with my ebook reader in its orange cover and the iPad in its bright red cover, it didn’t really look like it belonged to me. Up to date I have had an orange journal, a red one and one in purple. I think I need to go back to my usual color scheme after this one. On the other hand I am using mostly turquoise and purple ink to write in it…

We had barbecue for lunch: 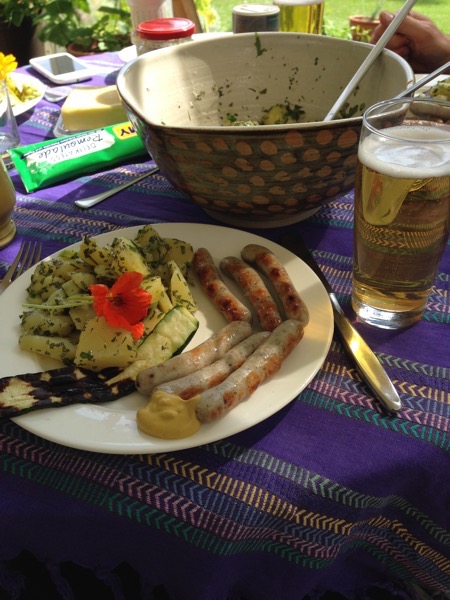 I started the afternoon by playing two of the alternate endings for „The Room Three“ which means I’m now all through with it. The game is gorgeous and I found the puzzles to be just the right amount of difficult. Most of the time. I did use a walkthrough for some of them in the end because I couldn’t figure them out. If I had taken notes while playing I probably wouldn’t have needed the walkthrough.

Sorry for the whining.

The boy and I watched some Star Trek. I pulled the crochet blanket out again and worked on it. That was it.

Today I will probably start teaching again. Official first day of school is tomorrow but we told our students they could come in today. Which usually means that we’ll sit around and wait to see who will show up.

I want to run today and do my measly strength training and all the usual things. I do have a list. In a nice, new turquoise bullet journal.

Woke up around five and dozed a bit. Read for 90 minutes.

Breakfast. No writing, again. Knitting. I did finish the body of the cardigan-in-progress and started the first pocket.

Then I found that my video hadn’t uploaded throughout the night and started the upload again. Did the dishes and such and waited for the video. Went running at 11.30 which is way too late. 9,66 kilometers. It was nice and I was pretty pleased but my legs were a little sore in the afternoon: 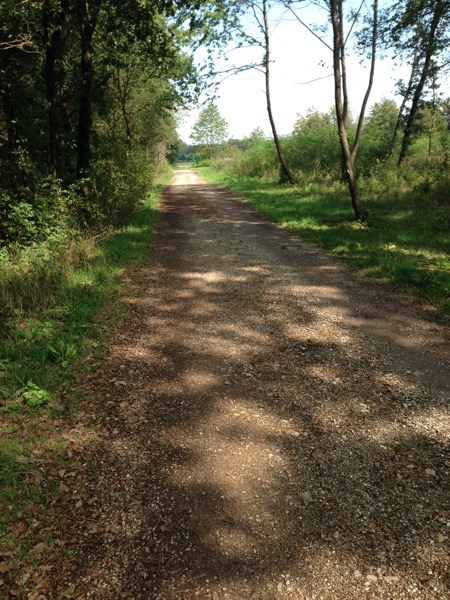 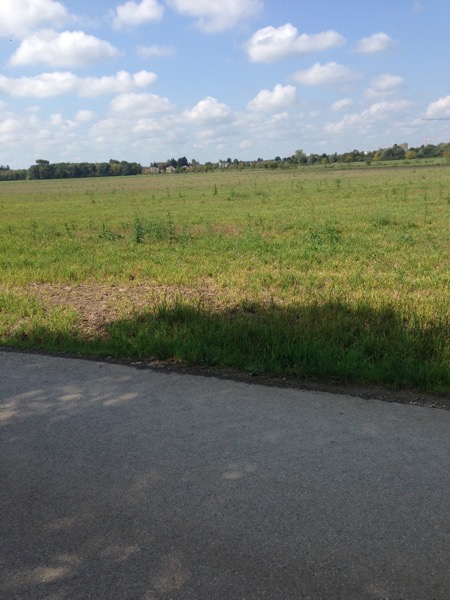 When I came back it was time for lunch and the kitchen was a disaster area. We had had leftover pizza, so of course my husband made this: 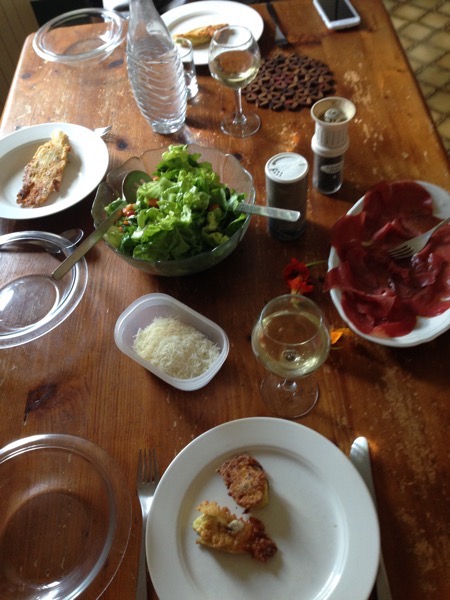 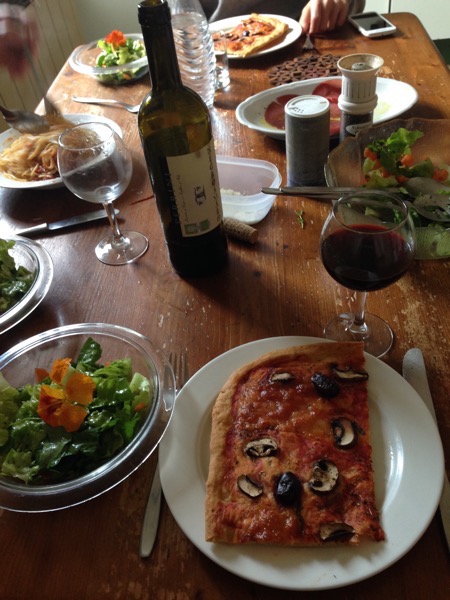 Basically, I came back from my run and began frantic chopping and stuffing.

We did the dishes right away (bonus points!) and then I sat down on the kitchen bench and didn’t get up for an hour. I have now successfully completed two of the four alternative endings for „The Room Three“. I find that game highly enjoyable. I’m also rather happy for walkthroughs because otherwise I would have thrown the towel in frustration at some point.

Then I finally took a shower and did my toenails and told everybody that the podcast was up and then it was time to watch Star Trek.

I did go to bed at a reasonable time at least.

Today I will achieve everything I had planned for summer break. Of course.

For once I slept in until 6.30. So, no writing before breakfast again.

My mother-in-law went to the doctor first thing because of her almost fainting the evening before, and the boy was so nice to walk her there. Nobody knows what happened yet, everything looks normal, even her blood pressure but she’ll have some more tests at the beginning of the week. It might just have been dehydration (pretty likely) or low blood sugar (not as likely).

I did manage to clean the house which was good, and helped to make pizza. 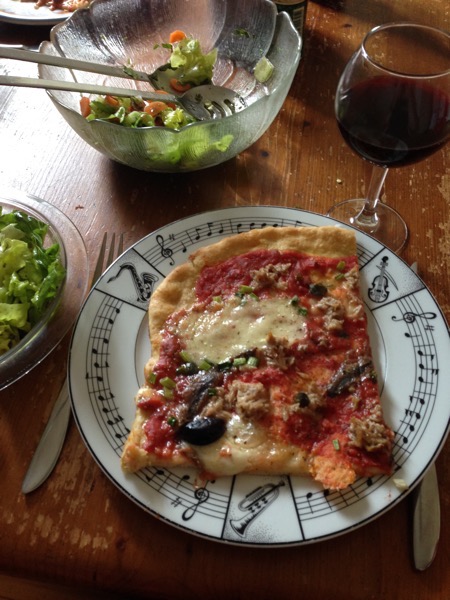 The boy had lunch with his grandmother.

I spent all afternoon getting the podcast ready for publication. It turned out that the video recording had a glitch around minute 6 where it didn’t record for a few seconds but the audio recording had everything. No idea what happened there. It took me ages to find out what was wrong, I lined up the audio and video and then when I watched the end the two were out of sync all of a sudden.

In the end, the only thing I could do with a reasonable amount of time spent was to cut out a bit of the audio. So there is a blip on the video. And I have no idea why that happened.

All of that meant no writing in the afternoon and no strength training. The boy and I did watch Star Trek, though, and he took a break in the middle to help his grandmother move laundry upstairs.

We had planned to got to that medieval market/tournament-thing today but last night – after a lot of thought – we decided not to. Spending a whole afternoon on this seemed a bit too much. And we’d both rather see something more authentic.

I am still waffling a little but also relieved because one of these days I’d really like to move the writing forward. And sit down at the sewing machine.

After watching Netflix I helped my husband make apple chutney from the very few apples from our garden, then it became clear that the video would take hours to get uploaded to Youtube and I went to bed early.

Today I want to run, write, and maybe do strength training after all. There will be mushroom pizza for lunch because we made more yesterday so that the boy and I could have a very early lunch before leaving.

So, a rather low-key Saturday, just as we like it around here.