So I knew I wouldn’t get a lot done yesterday with the whole „sleeping only for 4 1/2 hours“-thing. But for that things went really great.

I am a little more hopeful at the moment. And I think it’s totally due to two things. One: I am brushing my teeth right around dinnertime which prevents my nightly binge-eating (plus there is no chocolate in the house at all) and two: I wrote for three days in a row. For only 25 minutes but it’s making all the difference.

Also I have been adopting the policy of just moving the needle a bit all the time. I don’t just sit around reading and knitting when I feel low on energy but I realize that I’m low on energy and ask myself, „What small thing can I do that will make a difference  in the right direction now?“ And do it.

The drying rack is completely empty for the first time in weeks. Clean dishes get put away. Bills get paid. The clothes on the chair in the bedroom get hung up. And all of a sudden I have a little more energy than before. Huh.

Of course, I already knew this. And I am a bit afraid that I’ll crash and burn again but I am also taking long breaks and I’m reading a lot. Not quite as much as before, thought. And I’m totally okay with that.

So. I woke up super-early and thought about a comment someone made the day before, as you do when you wake up to early and can’t fall asleep again. And all of a sudden I was flooded with ideas about my own life and things I want to learn and change and do. (Yep, hopeless optimist, that’s me.)

I got up only half an hour later than usual and had a lovely, lone breakfast but then there was no time to write before my husband was getting up.

We had a nice talk and I decided that my new ‚work glasses‘ were bothering me enough that I’d go to the optician again to talk about it. I was sure that something had gone wrong with my prescription. I did the dishes, changed into jeans and went there.

I totally expected the place to be packed but they actually did have time for me and it turned out that no, there was nothing wrong with my prescription, it was just that I am so used to my old work glasses that allow me to read the time from across the kitchen now. I couldn’t have done that three years ago when I got them. So I need to just get used to my new glasses. The optician also suggested that I wanted to wear my old work glasses while teaching but I’m not sure. I tried playing the piano with those yesterday afternoon and I wasn’t happy either.

Seems I need a little patience.

I came back, went running rather slowly, trying out a pace that wouldn’t make my hip hurt and the app didn’t give me cues for changing from running to walking and back, again. I think I won’t use it anymore. I am thinking about starting the half-marathon training yet again (third time is the charm, or so they say) and just do the first week over and over and over until I feel that it’s easy. I don’t have a specific date for running a half-marathon, I just want t flexible running practice that will make me fitter over time. Also, being able to run 21k sounds really, really cool. Running pictures: 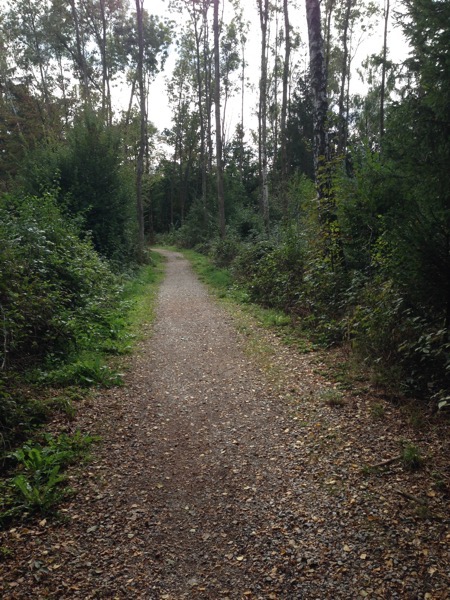 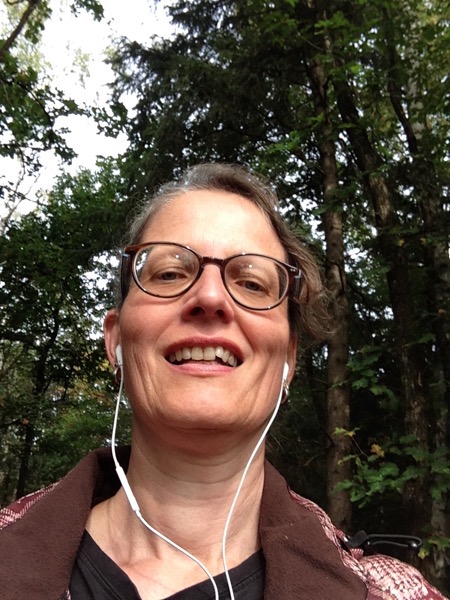 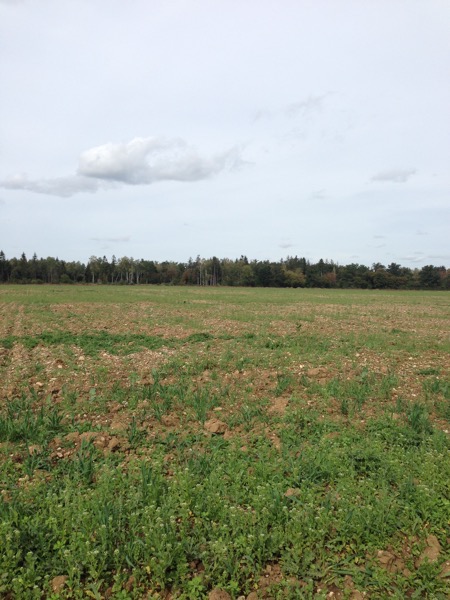 It’s starting to look and feel like fall here. I even had to wear a jacket. It did turn out to be too warm halfway through. Which was also when I met my husband going in the other direction. He was complaining that he should have worn a wool hat because his ears were cold. It is rather funny because when he runs (about twice as fast as me) he wears a ton of clothing while I’m wearing less clothes than indoors and the minute we return home he sheds all layers while I sit in the corner, shivering, wearing all the wool head to toe.

Then I took a shower, cut my own bangs for the very first time in my life (they don’t really look different and I think I need to cut some more on one side), and helped making lunch. We were late, as usual on Saturdays. The mood in the kitchen might have been a little tense: 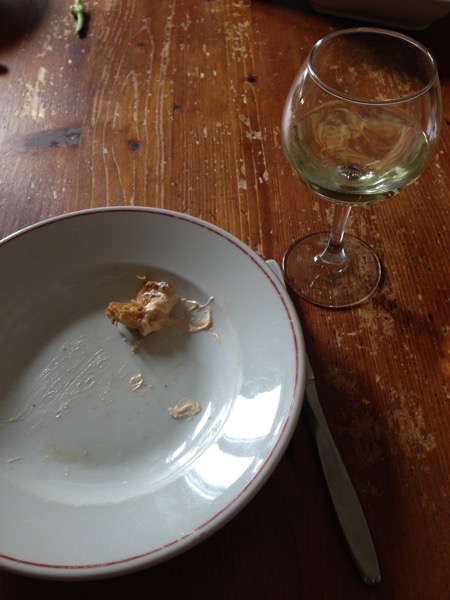 This is a picture of my last bite of fried zucchini blossom. I was so hungry that I forgot to take a picture. Second course was feijoada again: 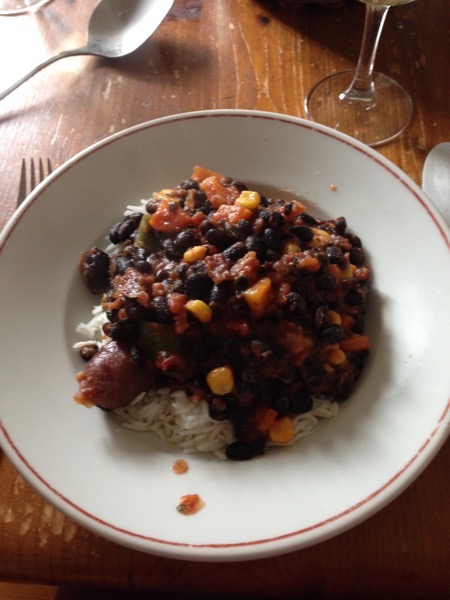 I love eating beans and rice, especially when it’s cold outside. Well, cooler at least.

We did the dishes together, then I went to my studio (no lounging in the kitchen after lunch is the new rule), published the podcast, sang a little, read quite a bit of the internet and played the piano a little. I even practiced. I’m learning Bach’s prelude in C major from the „Wohltemperiertes Klavier“ by heart again. Or maybe for the first time, I’m not sure.

Then came the point in the day where I felt all smug because my to-do list was almost done for the day and it was only early afternoon. The two things left on the agenda were writing and sewing and I realized that I was just too tired to do anything serious. So I decided to do a little spinning (move the needle on a long project) and continue watching a video that someone recommended and that I have been inching through all week. I keep thinking that there will be something worthwhile in there but so far there wasn’t. So I found myself suddenly listening to the video while reading revelry (bad habit) and then there were dance videos on youtube. Oops.

The boy and I watched one episode of Star Trek TNG while I was crocheting on his blanket (cozy and warm) and I had decided to not watch the webinar live because I had seen another one on the same topic half a year before. I might watch the replay at some point because – as I said before – Jessica Abel is really phenomenal and has helped me a lot but I didn’t think I needed to sit there the minute it was recorded.

Then I started writing this post and by then I was really, really tired.

So I wrote some new words on the story-in-progress and went to bed early.

Today will be another semi-lazy day, yoga would be fabulous and writing and music and sewing would be the cherry on top.

Yesterday also showed me again how much an evening off can throw me off kilter. If it weren’t for the #100daysofwriting-challenge and my renewed dedication to get things done this would have been a totally lost day. Which would have made me feel awful instead of tired and enthusiastic. Yes, you can be both at the same time. And that’s okay. Just make sure that you don’t stay tired for long.