That was a rather busy and somewhat exhausting day. But very good.

I woke up from the alarm at six, tried to make myself write first thing and failed. But I did get up on time, made breakfast and helped the boy get ready. He had a school excursion to the German Aerospace Center near us, so he had to leave a little earlier than usual in order to catch a train.

I meditated and read „The Daily Stoic“. Today’s contemplation wasn’t bad but it showed that the author can’t be a dancer. Pity. (The quote said that life is not like dancing but rather like wrestling and if you look at it like Marc Aurel that’s true but Ryan Holiday’s commentary – while still insightful – was missing the point slightly.

And then I set a timer for 25 minutes and wrote some new words on the story in progress. And decided to participate in the „100 days of writing“-challenge. It’s nothing big, just showing up every day, a hundred days in a row and write for twenty minutes. I think editing and such counts as well. I’m hoping that that will help me to get my butt in the chair more regularly.

I was really happy I did that because when my husband came over for breakfast he had one of those notes from his mother that derailed our plans for the morning. It said that his aunt might come over around ten with her car to help us get the hedge trimmings and such carted to the recycling place. His mother had known about this for a few days but only realized that my husband had to do most of the work because his mother is still not back to form and his aunt is having back problems.

So he got ready and waited.

Meanwhile I did the dishes and got ready to go to the optician. There I tested my new ‚work glasses‘ and ordered a sunglass clip. Since they needed one of my frames for shaping the clip’s glasses I left my new glasses with them again and went grocery shopping. Which went well but I forgot some things.

Back home it turned out that there had been no car but my husband had a tentative appointment with his aunt again for 3 pm. Or 5 pm. One or the other.

He had planned to make filled eggplant for days but with all the back and forth with the optician I had no time to help cook.

So I went back to the optician, got my new glasses, the sunglass clip, and a pair of contact lenses to try out, then went to another supermarket and came home. By then it was time for lunch but food was far from ready.

So we cooked together, and we both made huge mistakes because we really needed a break.

The food was wonderful, though, and delicious: 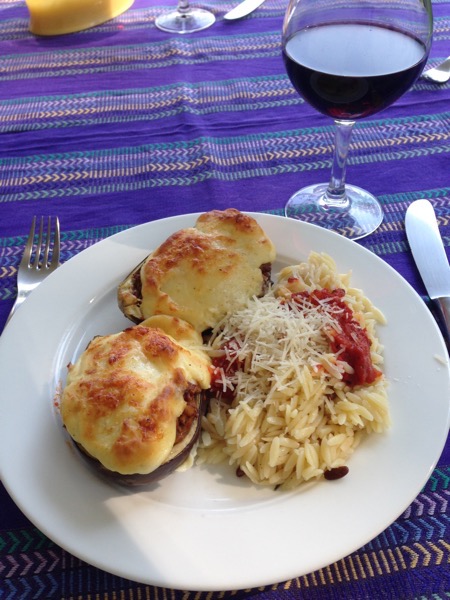 Then it was pretty late and I did regret not doing all the podcast prep the days before. I thought I had a lot of time in the afternoon since my first student had re-scheduled.

So I put on makeup and prepared the podcast and then recorded it and I finished just in time for my first student of the day.

Then more teaching, the boy decided that he didn’t want a lesson but only a quick practice because he was fried too.

Again I brushed my teeth right after work and changed into my pajamas. That really helps to prevent binge-eating. Even though it is a little weird to get ready for bed at 7 pm.

I did my daily drawing and went to bed early again.

Today, there will be the usual Friday cleaning and then I will go and buy Weißwürste and Brezn for lunch because tonight my husband and I are invited to have dinner at a restaurant with some friends of his. I’m really looking forward to it, also to the 8k bike ride there and back.

I’m hoping to get the podcast ready for publication this afternoon as well so that it can go live tomorrow.

I’m rather busy at the moment but I’m liking it because things seem to move forward.