I was cranky because I didn’t do anything the day before and was afraid this day would end up the same. When my husband showed up for his breakfast I whined at him for about two hours how I hate it that I always slip back into old, bad habits (and sometimes new, bad habits) even after doing well for two years or so.

And this is irritating for him as well. He gets all fired up for his weekend where he can devote time and energy to things he can’t get to during the week and there I am sitting like an unmoving blob on the kitchen bench, getting crankier and crankier. Also fatter and fatter.

Well, there isn’t much you can do when you’re in the grip of a binge eating attack, or when you just can’t make yourself do the thing that you really, really want to do, only not now.

So I thought back to the time when I managed to lose all that weight. And I realized that, while I had an epiphany that started the whole thing, what got me through the whole process was looking at what worked and what didn’t and then tweaking little things here and there.

I also started downloading books about self-sabotage and looking at coaching options, as one does.

So, together we came up with a plan. The big slump always happens in the afternoon, right after lunch. I tell myself that I get a nice half-hour break and the next thing I know it’s 5 pm and I’m still sitting there, feeling horrible.

I’m also thinking about energy and energy-management a lot and I’m actually not sure that I need all these breaks. I definitely don’t need a 3 1/2 hour break after lunch.

After that I felt so energized and motivated that I folded a load of laundry and put it away immediately. And then I helped to make lunch (tagliatelle bolognese, fried zucchini and salad (zucchini and salad from the yard): 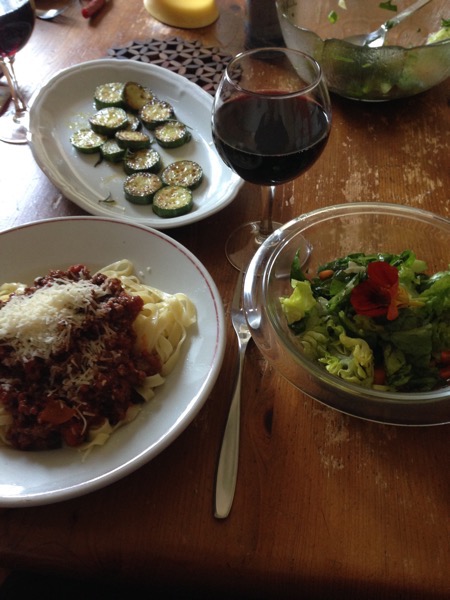 So today after lunch I did the dishes right away and then I took my computer and such and went to my studio. Where I sat down and did my singing warm-up and my piano exercises right away.

At that time my husband is taking a nap in the next room but he assured me that my music didn’t disturb him. I put the damper on the piano. I also happen to know that he really hates the piano exercises, so saying that he didn’t mind was rather sweet. It’s about the same as me saying that I don’t mind him playing drums right under my bed right before I turn out the lights at night… 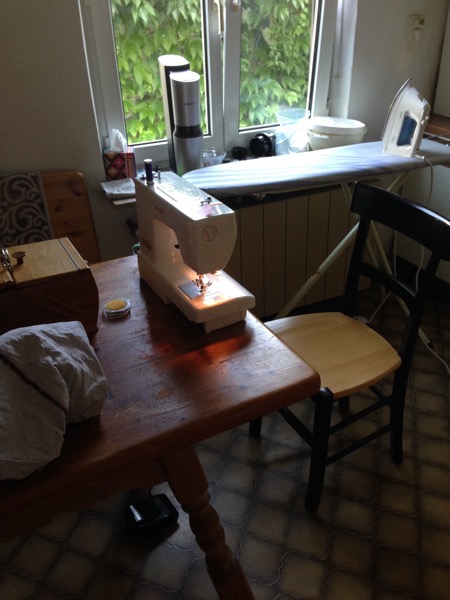 Yes, the kitchen is really that gloomy in the afternoon. I mended a pair of leggings that I’m using as pajama bottoms and a dress. And then I finally started sewing the Kew dress. I really love the fabric and I adore the pattern but I’m afraid it won’t fit. For one it will be too small. Though maybe it won’t be. Because after two hours of sewing I got this: 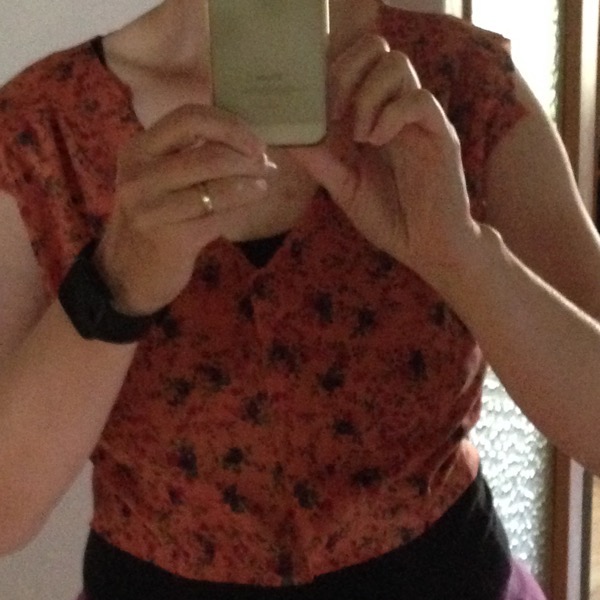 It might just work if I make the seam allowances narrower on the skirt. And maybe out the buttons right at the edge. And next time I will measure myself and the pattern before cutting out the pieces. Sure.

So that left me very pleased.

Then it was time for dinner and Star Trek (well, only Star Trek for me plus beer and crochet). The boy and I watched two excellent episodes. Then I went back to the kitchen, did the dishes and – very important – did not sit down and left the kitchen immediately. Because my husband has told me repeatedly that if he were sitting in the kitchen all evening he would be eating all the things too. Really, binge-eating is no fun even thought it always feels like it should while you’re doing it.

And sitting in bed at that time doesn’t really work either, I fall half asleep and then still have to get ready for bed later and have a crick in my neck. And go for a bit of cheese again.

So the new plan was to not sit down in the kitchen but go back to my studio to prepare this blog post, write a  little and write in my journal.

And that’s what I did.

I keep forgetting about the power of small tweaks. Now we just need to see if they will work again tonight.

Today is Monday which means running and all the usual and teaching quite a bit. Including the student who couldn’t figure out our new garden gate and went back home on Thursday. Poor thing. We have now started to leave the gate open with a brick to prevent anyone from closing it while we’re teaching. The old gate had a knob on the outside that could be turned but the new one only has a handle on the inside.

I am starting to feel a little hope for positive change.