I woke up from the alarm and lounged around in bed for half an hour. I really want to get back to the habit of writing first thing in the day.

Made breakfast, talked with the boy, was disturbed by my husband while meditating.

Did the weekly cleaning and changed the sheets on my bed, made pizza and was a little frantic because the pizza dough was way too soft. I think I put in too much water the night before.

Put some more flour into the pizza dough but it was still too soft and there were holes in it through and through.

The pizza turned out fine in the end, though: 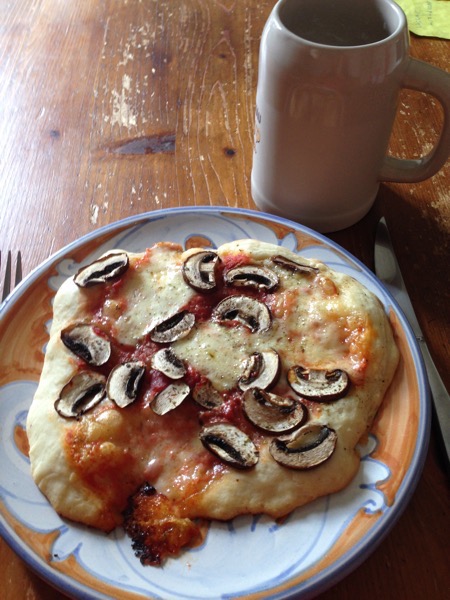 Then I spent some time ordering the sign for our music business but got an error message. ::Clue sad face:: I will have to deal with that next week or so.

Because of the sign ordering screw-up I did not do the dishes, also there was a load of laundry to hang up. I got that done just in time to get ready for teaching.

Taught four students in a row and was fried. I need to get used to teaching again, it seems.

Then the boy practiced piano and made himself some sandwiches for dinner, and we watched some very good Star Trek.

Afterwards my husband and I opened some champagne (it did end up over half the kitchen but not by design) to celebrate the finishing of my novel and the finishing of his guitar recordings. I don’t know if any of you remember his music blog but there actually might be some new posts in the near future. (That blog consisted only of an error message for months but it is up and running again. I’ll put up a link as soon as there is something to see and hear there.)

And then I had to do the dishes and I had planned to start writing a new story. I almost let exhaustion win but then decided to start the story and do the dishes this morning. Not ideal but I wasn’t up for half an hour of dishwashing, ten minutes of writing seemed much more doable.

Today there will be the running, and the cutting of my husband’s hair, and the writing, and the music, and the pulling out the sewing machine first time in months.