Woke up at 5.15 after not quite enough sleep. That’s what I get from doing the most important things of the day late which means that I am too tired to go to bed and end up not getting enough sleep. (Why yes, I tend to wake up earlier if I go to bed later, no idea why. I’ve never really gotten then hang of sleeping in anyway.)

I did force myself to write right away and produced about 600 words in 25 minutes. Interestingly, I’m usually quite a bit faster when I write in the evening. Even though I am definitely a morning person.

There was breakfast and getting the boy ready on time with the usual fuss of having to fill out forms and find money and envelopes for school. (We pay a materials fee once a year and there was money for the excursion in October.) I have to say that the fact that his new teacher has already planned the excursion for October leaves me rather impressed.

There are a few changes now that he is in tenth grade. With the excursion, for example, they are supposed to meet in Munich directly. No meeting at the school beforehand. He doesn’t need a signed permission slip for leaving the school grounds at lunchtime anymore, and some other things. Nice.

I did run yesterday, 6.4 very, very slow miles. I think it was the heat: 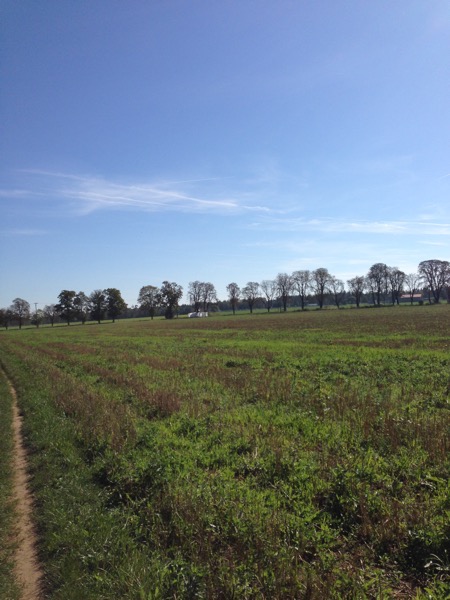 The sun was directly ahead for this picture. It’s time that I get some sunglasses: 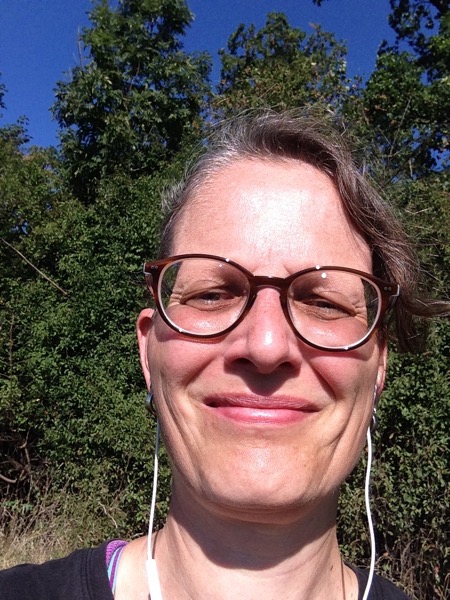 When I came back my husband was busy trimming the front hedge and my mother-in-law was sweeping the sidewalk. So I jumped in to help. She is still not feeling a hundred percent and was wearing a 24-hour heart monitor.

I have to say that spending 45 minutes sweeping and picking up hedge trimmings after running is a little exhausting.

Since my husband was way more tired than me, he had trimmed the whole hedge in the back the day before and had reached a point where he could barely lift his arms, I offered to make lunch for a change. I made Salade Niçoise inspired by this recipe (in German). It was an instant hit. And we’re usually not a „salad as a main course“ family. But then all the potatoes and beans and fish and eggs do make is less salad-y.

My attempt was not as photogenic as the original: 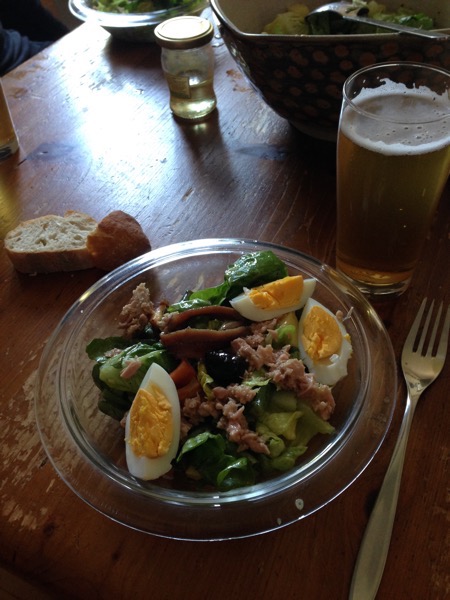 Then dishes and teaching and music. By dinnertime I was pretty spent and decided to not try and finish the novel that day. Instead I opted for an early bedtime. I did do my daily beginner drawing, though. The day before I had shown my koala attempt to my husband and while I found it horrible he deemed it ‚not bad‘.

By the way that is one of the most irritating things that adult beginner students do. They have a constant stream of self-talk that focuses on the ways their artistic thing is unlike professional master pieces and beat themselves up for it. As a teacher you can sit there telling them that, actually they are making wonderful progress and that you’re very happy with how they are doing, and that, sorry, but they are a beginner and this is what beginners sound like, but they never really believe you.

Seems I’m one of those irritating adult beginners. Which means I have two options, really, I can either stop to learn how to draw, or I can just be content with my beginner drawings as they are. Both options come with optional negative self-talk.

And no, I am too timid to show you my drawings. Some day. At the moment it is all about cubes with distorted shadows and balls and yesterday’s koala with fur was a big exception.

Today there will be the grocery shopping and all the usual stuff and if I manage to sit my butt in the chair for long enough I might end up with a finished story. Or it might need an epilogue. I don’t know yet.