I’m starting to look forward to teaching again. I still feel like I want the free time but I’m also craving structure. And today taught me again that when the boy leaves for school in the morning I have more space for my own stuff.

I did wake up rather early again. I’m feeling like I don’t get enough sleep, despite going to bed around ten every night but then I wake up before six. Or even around five. Weird.

My husband was up early-ish too. We had one of those days where we rub each other wrong right from the start. That did improve, though.

Just when I was ready to get going the boy got up. And we even talked. But there went my morning writing time. I had decided to skip running in favor of writing and ended up doing neither.

My husband had the sudden urge to clean the fridge so we emptied it and turned it off. I ran all the errands and went to the health food store and when I cam back my husband was back from his dental cleaning and the kitchen had a huge puddle right in the middle. Note to self: don’t turn the fridge off and walk away, the freezer part will defrost and the water needs to go somewhere.

It was raining like crazy while I was out and people where in a bad mood. Distracting.

We made lunch in the middle of a kitchen in uproar which is why there wasn’t much cooking involved: 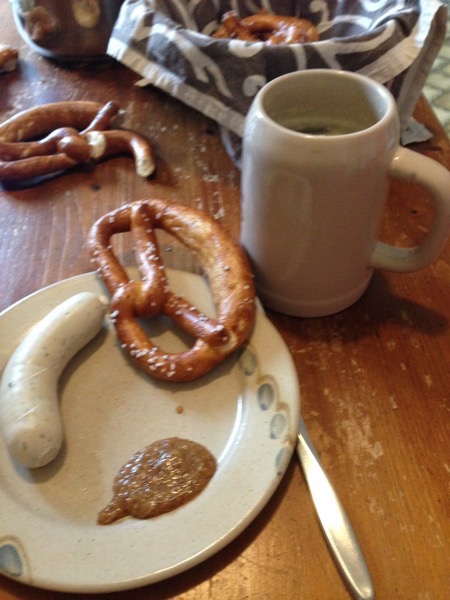 Don’t worry, I ate more than that. In fact, I ate twice as much but you leave the Weißwurst in the pot until right before you eat it because cold Weißwurst tastes horrible.

We finished cleaning the fridge right after lunch and then my husband made the mistake of looking at the bathroom properly which resulted in a two hour cleaning session with a lot of cursing. I did mop the kitchen and the bathroom, and there went my third writing slot of the day. (Theoretically there was one between 6 and 7 in the morning but that one rarely gets used.)

I taught a student. It was fun.

I wasted half an hour on the internet, and just when I was thinking about maybe writing my mother sent me a message, berating me for not sending my father the photos of the family reunion. I get that for him a week is a very long time but for me last week went by in the blink of an eye. So I found a way to make the pictures accessible to him (I hope but technical shenanigans might ensue) and then I had to find out how to work the scanner again and how to get the files onto my computer. I have the suspicion that the printer/scanner (also fax but who uses that these days?) doesn’t really work with my computer’s OS but I’m not quite sure. In the end I did plug a USB drive into the printer and manually transferred everything.

Wasted some more time, Did about 15 minutes of strength training with a boy who was all excited about a new iteration of one of his favorite video games. Helped my husband again. Watched some Star Trek with the boy while knitting on the handspun Cria.

Did my drawing exercise. First time since August 22nd. Stacked tables are fun and I am actually contemplating spending a few more days doing more of those.

There was a bit of conflict with the boy the day before because I dared to ask him about his Latin studies. Turned out that out of twenty chapters of the „Latinum for Dummies“-book he has managed to do five throughout five weeks of summer break. I was a little appalled which did nothing to improve our relationship. (My husband said, „He actually did that many?“) I did manage to smooth things over by just asking him how many chapters he had done and how many he had left in a carefully neutral tone a few hours later, and yesterday morning he actually told me. Also, committed to doing two chapters. Which he did. So he only has to repeat that again today. And tomorrow.

His eczema is looking much better. Prescription cortisone is helping better than the meek one you can get without seeing a doctor. Apparently. Next step will be to start cleaning his face regularly again, turns out that the stuff he is using on his face is hurting his hands. He also has started to use handcreme after every time washing his hands and that is helping too. So that is getting better.

After watching Star Trek I did everything to procrastinate about writing again but after drawing and starting this post I decided to finally tackle the writing after all. I set myself a goal of writing for 25 minutes per day, each day, which I already missed because I didn’t write on Monday. While I did write last thing in the evening I also fell asleep while doing it, not the best setup methinks.

I am totally determined, though. Not quite sure how much of a difference that makes.

I also downloaded samples of four more books on writing and productivity. Because that’s what I need. As if I didn’t know all I need to know about that.

Today there will be running and all the usual plus drawing and writing. Extra bonus points for getting out the sewing machine,