Woke up early determined to have a better day than the day before.

Lounged in bed for 1 1/2 hours. Husband was up rather early so I didn’t even meditate.

Made great progress on the Cria sleeve while talking to my husband. 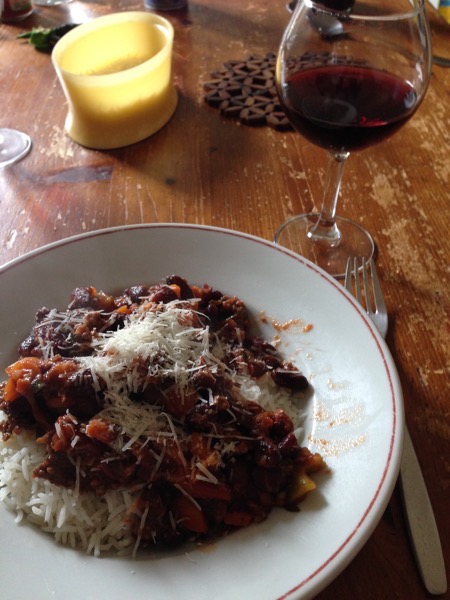 In between I started changing the sheets on my bed but gave up.

Played new game for an hour. Thought about birthday presents for my father, talked with my husband about it. Husband had an idea that turned out to be not quite right, then I found something in the end. (Book about trams in a city that has meaning for him. He likes trains.)

Since I still didn’t feel productive I cleaned out my inbox. Ordered birthday presents for my brother-in-law. Procrastinated on the dishes. Updated the list of pre-ordered books in my bullet journal. Found out that the next Mercy Thompson-novel will be out in March and pre-ordered it. Updated my budget with all the books. Made a plan for next week in my journal

By then my husband was slightly confused by me still sitting in the kitchen with my computer. He reminded my about the documentary we wanted to watch together in the evening. He had seen the first part the week before and had rewatched it with the boy and me during the week.

Opened Scrivener, stared at the screen, closed it again.

Thought about playing the new game some more.

Finally managed to pull out the heavier down comforter, pack away the thinner one, and change the sheets.

Yawned a lot. Turns out that sitting around doing nothing is rather tiring.

Booked a train ticket for the boy in October. Had to go through the whole process twice because I had my credit card detail wrong the first time. It didn’t tell me to change my payment details, no, it just threw me out of the whole booking process. Fun.

Now I’m not sure if all of this can be counted as productive procrastination but then I did take care of quite a few things that needed to be taken care of.

Star Trek with the boy, documentary with the whole family, early to bed.

Today is the beginning of a shiny, new week! This week is the last week of summer break! So this week I will do everything I’ve been wanting to do all summer.