I had a rather good morning with actual writing (166 words in five minutes) and meditation and such.

My husband and I did also start talking about marketing for our teaching a little, so that was good. 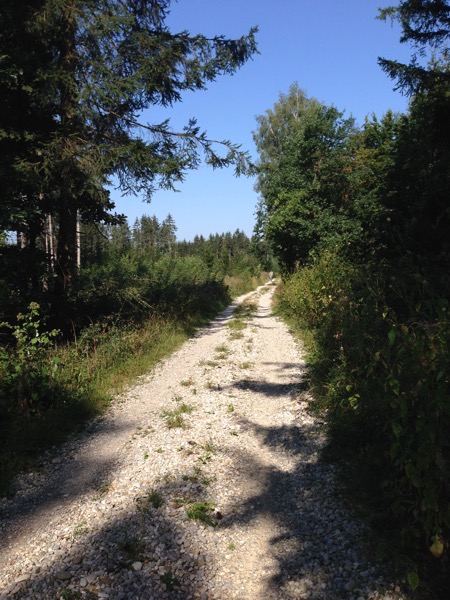 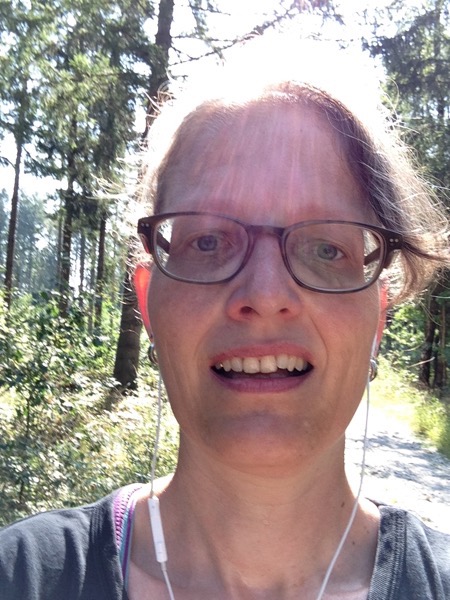 Unfortunately I decided to run a bit of the path that I usually walk and there was a root buried underneath the leaves on the ground and I went down.

It’s nothing serious but I have a badly skinned left knee. My hands were affected a little as well but they are almost fully recovered by now.

So I was a little shaken but not too much, and took a shower, trying to wash the dirt out of the knee. Then I disinfected the wound and found that my disinfectant had a „due by 2012“-date on it. Also, that I didn’t have big enough band-aids.

So I went to the nearby pharmacy and was lucky enough to get my very favorite sales woman (not). I still remember the conversation we had several years ago (might have been more than ten) when I went in (different pharmacy) and asked for allergy medication. First, she told me I should try the homeopathic pills instead (was a bit miffed when I told her that I had already tried those and they didn’t help at all, unfortunately with those the placebo effect did nothing for me, too bad) and then she told me that nobody needs a 100-pill package of allergy medication because – and I quote – „hay fever only ever lasts three weeks in the spring anyway“.

Yeah. I wish. Funny how my current doctor prescribes really heavy allergy medication to me in 100-pill packages several times a year. Grasses can send out pollen any time between January and October in these parts and my own allergy symptoms are usually worst at the end of July.

Well, turns out she can’t see blood as well. I’m sorry that I went into the pharmacy with my knee all skinned and awful but I really needed some different band-aids. Turned out she was pretty helpless and didn’t know what to do either. At least she sold me a new bottle of disinfectant and some band-aids that are almost broad enough to cover my knee. Oh, and then she said, „And skinned knees always hurt so much,“ with a shudder.

Now, my knee didn’t really hurt at that point, I might still have been in shock a little, I don’t know. But I just spent several weeks with my foot hurting like crazy with stabbing pain alternating with burning pain that woke me up in the night. Also, I’m rather happy that I didn’t break anything. And that my glasses aren’t broken. Thanks.

Then I helped making the salad for lunch: 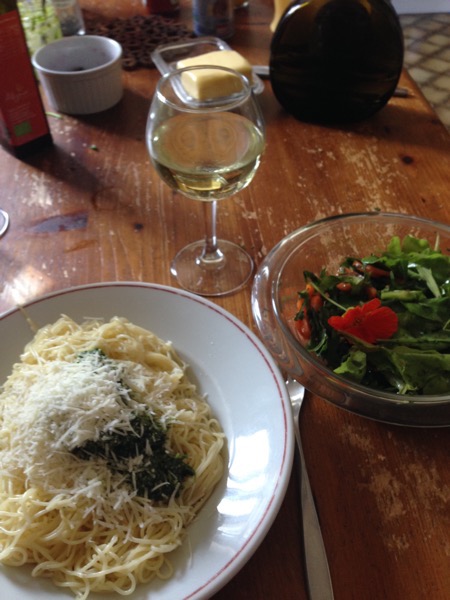 Homemade arugula pesto on capellini with salad and a rather yummy white wine.

Then I did some urgent procrastinating, and managed to get ready for the podcast. I forgot one project so there isn’t any picture. Next time.

I also made a packing list for my upcoming trip and it’s epic.

Then I recorded the podcast, started the cutting and post-production and waited for my student.

Saw some very good Star Trek with the boy, decided to attend yet another webinar (about email list-building with Nick Stephenson and Joanna Penn, that was the one that went wrong last week). And then I started writing this post.

Went to bed too late but managed to get my makeup off and my teeth flossed anyways. I count that as a win.

Today there will be: the getting the podcast ready to be published, the finishing of the current pair of socks, the going to Munich for errands (either by bike or if my knee is not up for that I’ll take the train), the second round of strength training on the new program (I’m still having sore muscles from Monday. Note to self: don’t triple the beginner workout next time.) the research about train and bus connections for tomorrow, and the packing.

I’m still waffling about taking the ukulele or not but I already did pack the lead sheets. I’m also waffling a little about jeans versus skirt. Jeans is in a way easier but would mean I’d have to insert a zipper into an almost finished cardigan. The skirt would be more comfortable, has the bigger pockets but would mean buying new pantyhose. And showing off my neat knee band-aid. I’m not quite sure how sophisticated that is but then sophisticated probably is beyond my reach anyway.

Oh, and I need to get everything done today that I didn’t manage in the last few days as well.

This will be a lot of fun for sure!