One can clearly see why it’s wise to not pay too much attention to feelings in the moment. They just go up and down all the time anyway.

I spent the first hour of the day wasting time again.

But. I did manage to have breakfast not too late, do my daily drawing and meditate before my husband was up.

Started the second sleeve of my Cria cardigan, talked with my husband, talked a little with the boy, did the dishes, went running a little too late (it was pretty warm already): 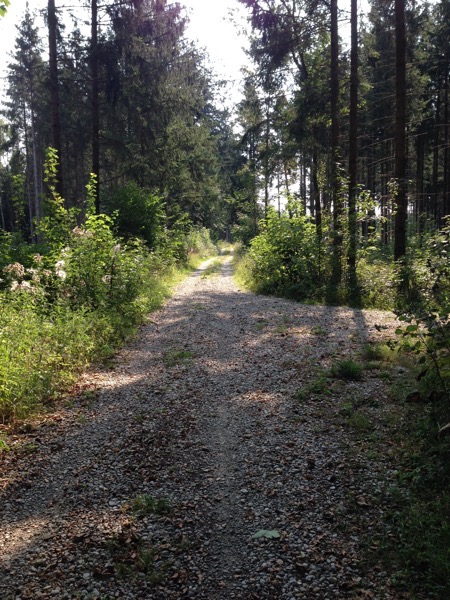 I took a slightly different route so I had more shade. No field for me yesterday.

Came back home, finished reading an amazing novel („Jane Doe“ by Victoria Helen Stone, it came recommended by Ilona Andrews and since it’s in KU I read it right away). Helped making the salad the we had along with leftover moussaka:

I did not drink wine for lunch even though my husband did because I had that doctor’s appointment in the afternoon.

I did manage to write 300 words after lunch before I had to leave.

Doctor’s appointment went very well, we were just going over the preparation for the colonoscopy and since the doctor is a kind of friend and we hadn’t talked in ages we filled each other in on what happened in the past months. He is injured yet again, he has had some really bad months lately.

I went to the nicer health food store after that and took the train back home, went to the pharmacy to get my allergy medication (they didn’t have it, it will be there later today), tried writing some more but needed a break.

Then the boy and I did the first and easiest exercises from the book „Convict Conditioning“. It was fun. I’m really out of shape in that regard and will need to take things very, very slowly. But that’s okay. (No handstand pushups in my immediate future. In fact, we did wall pushups today. Baby steps.)

Then we watched some Star Trek and had endless discussions whether the science behind the story works. The boy is very concerned about that, which I get, but still he could just pretend that it’s all magic. He’s fine with magic in stories, just not with almost real science.

Then my husband decided that instead of going swimming in a lake by himself as he had originally planned for today he’d rather go to another beer garden with us for lunch. No argument from me. I would have liked the swimming excursion as well but I don’t have time for that this week.

The boy did complain about things always being so last-minute (the night before). Also, outside and hot and such. But he gave in.

So today I will write and do all the usual things, and then ride my bike to a very nice beer garden, then come back home in time to choose new glasses, then make music, and then teach a student. The day will be topped off with another webinar (the monthly Orna Ross one). And somehow I need to find the time and headspace to prepare the podcast and start writing my monthly Patreon newsletter. Which was due at the beginning of the month. Ahem.

I’ve also been thinking about what to pack for my weekend away. The weather will be pretty mixed, one day of scorching heat followed by three days of cool and wet. That makes minimalist packing a little hard. But I think I’ll just wear my denim skirt and add a cardigan and pantyhose into the mix. And a raincoat. And an umbrella.

I have also researched possible sock patterns to knit while traveling and have come to the only possible conclusion:

Of course. What else.