Woke up early and didn’t waste an hour first thing, had breakfast, meditated, did my daily drawing and had just opened the computer to start writing when my husband showed up much earlier than the rest of the week.

We talked while I finished sewing the binding on the top that had been sitting on the kitchen bench for more than a year. It looks like I’m finally starting to dig into projects that are weighing me down. One project done, dozens to go… 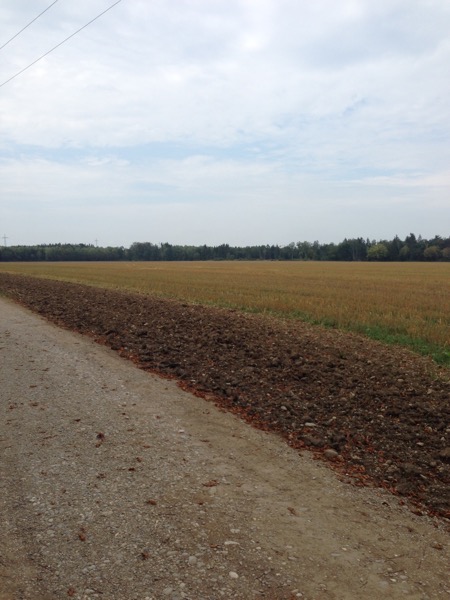 There were two or three moments when I just ran along and did not have the impulse to stop and walk. So things are starting to look up.

We had mozzarella caprese for lunch, I didn’t even help at all, and my husband made leftover spaghetti for me because I don’t really like tomatoes: 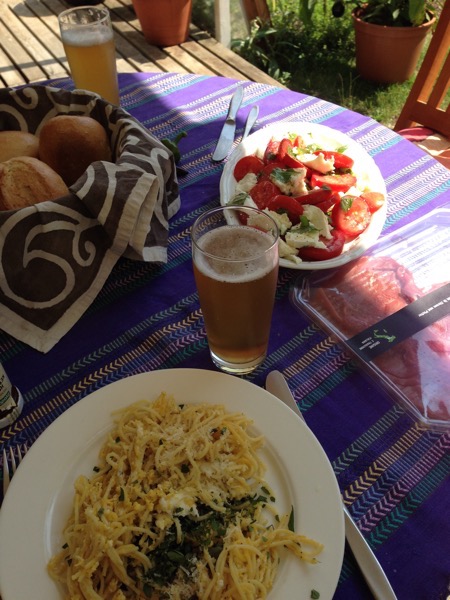 I did the dishes, managed to finally get the top case onto the Nintendo, tried to write, and got ready for the Leberkäs-Day. My husband and I are members of this society for improvised music. And once a year, usually in August, the head and his wife invite people to their home. We sit on the terrace and talk and eat and drink. We’ve been invited every year for years but have only gone once. Another time we started riding our bikes there, I had a flat tire that we could barely fix and went back home again, and another time the whole thing was at an inconvenient time.

So yesterday we took our bikes, some tabbouleh, carrots from our garden and some extra beer in a bike carrier and rode for an hour there. The provisions were my husband’s idea, of course. The ride was fun – if a little hot – and we had the best time there. I met another knitter/writer who also dyes yarn, and my husband got to sit next to someone really likable as well.

We did go home slightly early in the hopes of getting home before the dark but had to turn on the lights right away.

We went home and talked a little over another beer and I went to bed too late.

Woke up from the alarm and wrote this post.

Today I want to write all the words, work on the DS some more, make some music and get some other things going. I totally agree with my husband who said that having a summer break like this where we can focus on our own stuff plus do some extra thing every few days is just the best.