I slept like a log for nine hours straight. Slightly weird. And that led to an hour of reading before getting up. And then I found that I had forgotten to buy bananas for my breakfast muesli so I had to make do with just the blueberries. Tough.

I dawdled until the boy got up at 10.30 and decided to go to the health food store first. Then I attempted to run but my heart rate went up to 170 right away and so I walked most of the way and cut the whole thing short. I’m not quite sure what to do about my running. Maybe I should restart the whole half-marathon thing. It’s more about me going out and running a couple of times a week than actually going the distance and if I start over I might be able to actually run instead of mostly walking. Not sure yet.

Then I made lunch: 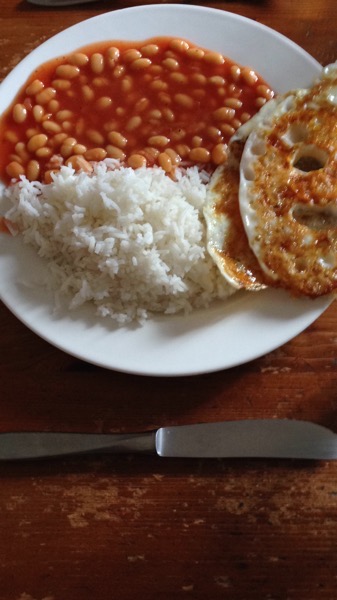 Rice, baked beans and fried eggs. I can cook, really. Or I used to anyway.

Then dishes and a shower and teaching a student. I practiced and then I started waiting for my husband to come back home. There were two trains he could be on, one would have arrived at 4.30 and the other two hours later.

I’m actually rather proud that I didn’t spend the whole afternoon waiting.

And the whole time I was afraid that I might have killed some of his precious plants. The tomato plant leaves are not looking good right now but when he came home he told me that that is perfectly normal at this stage.

I taught my second student and then, right when we thought he’d taken another train my husband came home. And needed time to himself at first, so the boy and I watched an episode of „Deep Space Nine“.

After which my husband and I talked for an hour or so and then I went to bed.

Today I want to do all the usual things and teach one student even though it is a public holiday here in Bavaria. It would be perfect if I could move one or two of the big projects forward. Well, at least I wrote a bit yesterday. Not as much as I wanted but that’s nothing new.

It feels like there is something every day. It’s not really true but still. And next week I have a doctor’s appointment and on Thursday I will travel for four days.

I really hope to have the novel draft done by then. I’m really close. But only if I sit down and write.