So as planned my husband and I went to one of the five lakes that are West of here.

I woke up early but not early enough to write, had breakfast and started working on a project that occurred to me the day before while recording the podcast.

My husband and I had planned to leave at 10. We actually got away half an hour later than planned but that meant we could talk with the boy a bit before leaving. He even helped me do the huge mountain of dishes.

Slathered in the dreaded sunscreen we hopped on our bikes and went our merry way. It was still rather hot. But on the bike it seemed a little colder than while walking.

It took us 75 minutes to get to the lake. Then we changed and jumped in briefly. Then off to a nice restaurant with a view of the lake (it’s the Wörthsee): 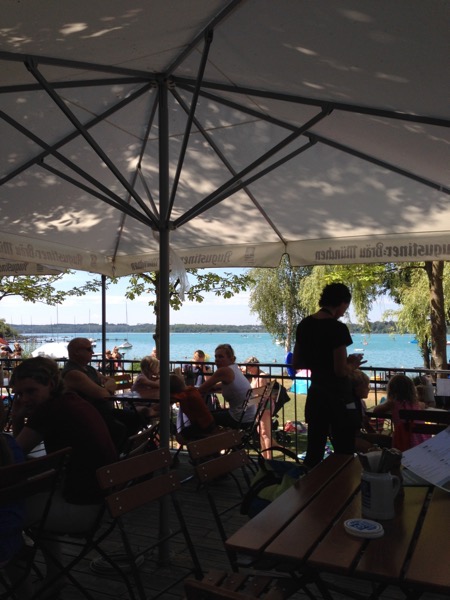 And yes, the water was that turquoise in real life. We had some very good pork roast: 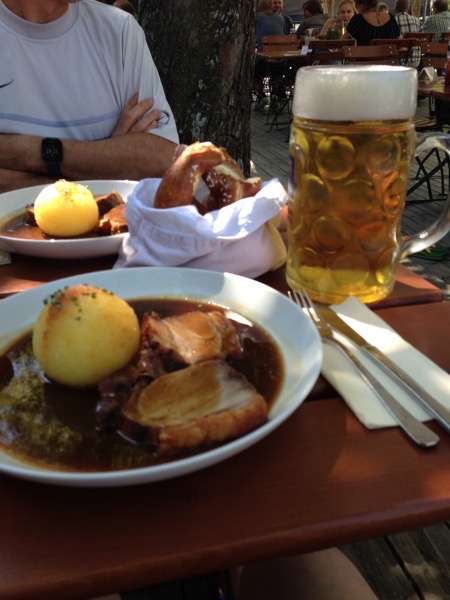 And then traditional amount of beer. Eliandhra reminded me the other day that in Bavaria a small beer is what the rest of Germany considers a big one. (The small one is half a liter which is a little more than a pint.) These glasses are one liter and it used to be that that was all you could get at traditional beer gardens. If you ordered a small beer they would look at you funny.

At this restaurant they didn’t have the big ones (Maß) on the menu but when we asked it was no problem.

We went back home pretty soon after having eaten. By then it was really, really hot and we felt lucky that half the way was through the woods.

We were back home around three.

After a brief pause I decided to go grocery shopping anyway, so I hopped back on my bike (ouch) and went to the big grocery store. I didn’t buy much but I did get some licorice and chocolate. My husband will be away for two days or so next week and the boy and I are planning a big junk food-palooza.

Also, my MIL talked with the boy, offering to cook for him while my husband is away. So that I won’t have as much work.

I find that baffling. When my husband is away I usually cook things that are really easy like frozen pizza. If she cooks for the boy that still means I need to make something for myself. I never quite get how her brain works. She probably assumes that I’d just eat a sandwich for lunch when left on my own.

When I was still living alone I did cook for myself all the time. Maybe not with all those fresh herbs and such like my husband. I also usually cooked something that would be enough for two days and only reheated everything every other day. I definitely believe in taking care of myself as well as of others. (Junk food aside.) We only do the junk food thing because my husband is rarely away. If it were just the boy and me we would still have wonderful home cooked meals every day. Once I had relearned how to cook, that is.

It’s funny. When you never cook and have only used the ‚new‘ stove for reheating things you get totally out of practice. I am rather fast at chopping, though.

Then I finally took a shower and the boy and I watched some Star Trek. I had already changed into pajamas (at six) and sent the boy to open the door when someone rang the bell. Turned out that the student of my husband’s who didn’t show last week decided that he’d come in today. We couldn’t find my husband at first but he agreed to teaching eventually. That’s the self-employed thing you don’t say no if you can make money.

I fetched him a shirt and then he came to ask the boy and me to get the garden ready for the impending thunderstorm. Which we did.

The one evening I decide to spend in my pajamas. I don’t think I did that in months.

Then we finished watching our episode, I remembered the load of laundry in the basement and helped my husband hang it up and that was that.

I don’t think the podcast will go out today. There was just no time to get it ready yesterday and today I will leave around 9 am to meet a friend. She lives a couple of hours away from here and only comes to Munich once a year.

Today it’s supposed to be twelve degrees cooler than yesterday. It is raining already. I can’t decide if I should wear jeans or a long-sleeved dress. I might even need socks.