Woke up at 5.30 because of someone driving his car very loudly through the street and couldn’t fall asleep again.

Still managed to get up so late that there wasn’t time for writing in the morning.

The others got up a little earlier than usual, especially the boy who had to set his alarm for 8.30 and we actually managed to leave the house in time for our train. It was very warm but still not so hot that you just want to crawl into the shade.

The hike went well and there were way less people around than usual. My fitness has really improved but I still feel really bad at the end of the hike. Nobody else does, by the way.

The beer garden was relatively empty. It seems Monday in August at 11.30 when it’s really hot is the way to go.

It was the first time ever that we brought our own food and that was a great idea: 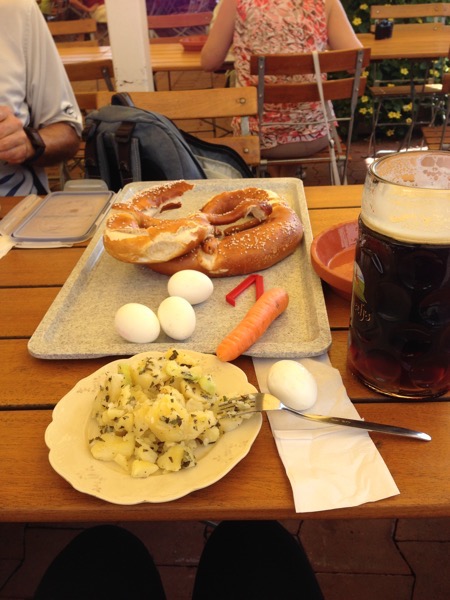 Despite the heat we still drank our usual Doppelbock: 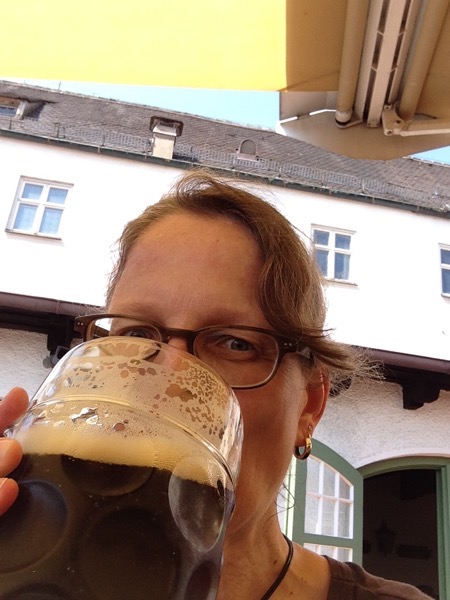 That beer made me rather talkative on the way back. The boy was talkative as well, we were a little too much for my husband even though the boy had had no beer at all.

We were back home at 2.30 with a visit to the health food store on the way.

Afterwards I got nothing done – which was to be expected. I actually started to watch dance videos on my computer in the afternoon!

The boy and I watched Star Trek, we talked some more, I went to bed early without doing any dishes.

Those dishes are still sitting in the sink now, I’ll tackle them after breakfast.

Today I might go for a short run but then my legs are pretty sore. I want to do all.the.things but it’s still so hot, we’ll see how that goes. Writing would be good, sewing would be great, I’ll see.