It seems I’m finally getting into summer break properly.

I slept wonderfully until 6.17 because I opened all the windows over night. That meant foregoing the blackout drapes which was a great idea.

I turned the heel on a sock, and learned some more about the GIMP software which is becoming my new major project. It also seem that I need to teach myself how to do graphic design. I hope I’ll succeed.

Around lunchtime I decided that I need to spend less money on books (yet again) and that it would be a good thing to borrow more through the library. I had renewed my library card on Friday so that I could borrow the GIMP book, had borrowed two more through Kindle Unlimited (and one of them was terribly bad but the second one is rather good) and then started dreaming about borrowing all those very expensive non-fiction books that I’d like to read and that are cluttering the „buy later“-folder on my Kindle from the library. I even started researching ebook readers that would work with the library system. All libraries in Germany use the epub-format. And I can’t just convert the files because they are understandably protected.

I was just about to order a cheap Tolino (which is still 60 Euros) when it occurred to me to see which books I could get. So I renewed my card for the Munich library.

Almost none of the books that I wanted were in the system. I did borrow two that looked interesting but my plan to get another device just for that looked rather foolish.

I can read the library books on my iPad, only I like the e-ink readers much better. Not enough to spend the money on one just in case I’d like to get a library book, though. Books like the one on GIMP – with a lot of pictures – are better read on the iPad anyway because it has color.

Lunch was spaghetti aglio e olio e pepperoncine with arugula salad. My husband also had mozzarella caprese. As usual everything but the spaghetti, the oil and the cheese is from our garden: 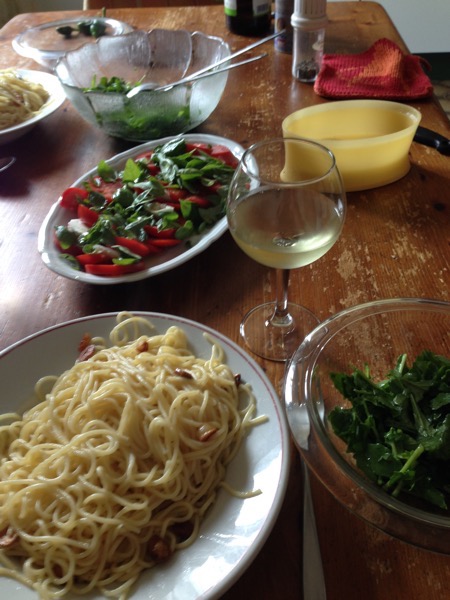 Wanted to start sewing the Kew dress but the afternoon got away from me. Had thought about altering the ugly, ill-fitting pair of shorts that I bought last year or so. I wanted to shorten the legs to make them a) less constricting and b) a more flattering length.

Fortunately I decided to just roll them up first and it turned out that they are so ill-fitting (and also too small everywhere but in the waist) that it would have been wasted effort.

I then decided that the next time I needed to wear shorts I’d just use my running shorts. They are a pair of black short leggings that I drafted and made myself. They fit rather well and look much better than those other things.

Today we will do our annual hike to the Andechs monastery. The boy doesn’t really want to. He said, „The food isn’t any good and it’s hot and exhausting.“ He is right, of course, but he will have to come with us anyways.

We parents are only doing it for the beer but he doesn’t want any. (It would be legal for him to drink beer or wine here with his parents present. The ouzo he got last Friday would not have been but nobody really cares.)

In addition to the running shorts I will also be wearing my brown tee with the Jane Austen quote and my Vibram Five Fingers. I offered to stay ten meters behind the rest of the family to not embarrass them after my husband asked if I couldn’t wear any other shoes. The alternatives were Birkenstocks (not the best for hiking up- and downhill), Mary Janes, or sneakers that make my hips hurt. I really want to get myself some ‚barefoot‘ sneakers that look a little less ridiculous but I’ll need to save up for that first.

We’re hoping to get going early enough to not melt on the way. Most of the hike is in the trees but not all. I really hope I won’t regret this.

This week is shaping up to be full again, hike on Monday, Stammtisch plus one student on Tuesday (one after the other – student first), the boy visiting a friend on Wednesday, podcast recording on Thursday, me meeting a friend in Munich on Friday, and then I’ll look forward to an empty weekend. Also, my husband might be away Saturday through Monday.