Woke up as usual, had cake for breakfast and forgot to take a picture. The boy had the first two periods off (well, that was the part where the whole school goes to church that isn’t mandatory) and so he and my husband got up around the same time.

I unpacked my presents: 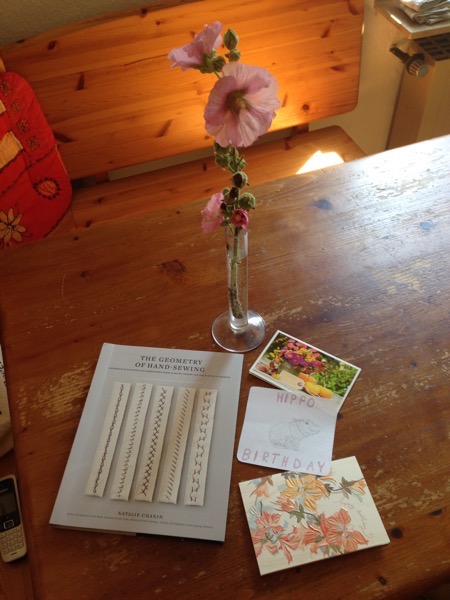 A card from my mother, a great book from my sister (plus a rather nice card, my mother resents spending money on things like birthday cards), and a drawing by the boy. The flower was from my husband. Apparently those grow in our yard, I had no idea. He also gave me some money with the words, „You are always so strict with your budget so I thought you’d like this.“ He was right.

I loved the drawing: 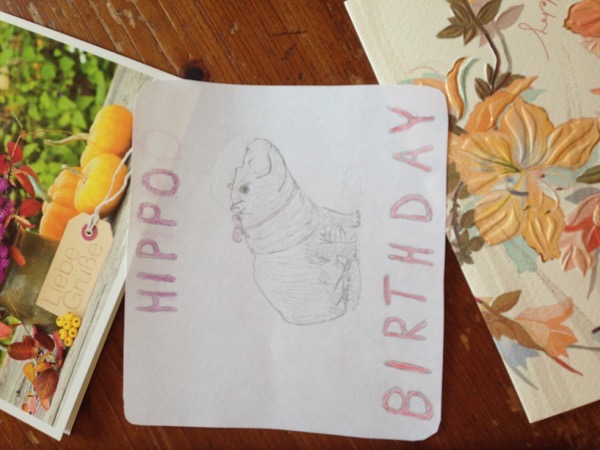 Then I sat down to knit. In between I pulled out the new bluetooth keyboard I got for my phone and found it covered with the remnants of the black purse that I had thrown in the bin after the last time I had used it. It was disintegrating so hard that I was covered with flecks of black „vegetarian-friendly leather“.

So I took my husband’s birthday present and ordered myself a new black purse. Apparently I’m still at that stage where money can buy happiness.

Then I got ready and decided to mend my orange dress. I was too lazy to pull out the sewing machine and did it all by hand. Sloppily: 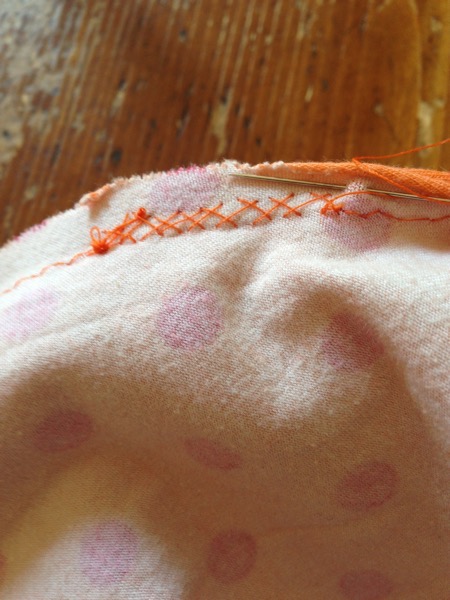 Then I taught a student, there was champagne, sandwiches and an omelette for lunch and then I taught some more. Watched the Tour and spun in between.

I was very happy that I only had a few students, it was as hot inside my studio as outside.

In the evening we went out for dinner. It’s a medium-fancy Italian restaurant that we usually like a lot. The food was great but our waiter wasn’t.

When we came they were in the middle of a rush so we were okay with waiting a little longer for our menus and to order. But then the rush subsided and a lot of people who had arrived later than us got their food and left much earlier. Most of them just had pizza instead of a four-course menu, but still.

Ihre was an attempt to calm myself down (the restaurant was rather loud as well, serves us right for going out on the last day of school): 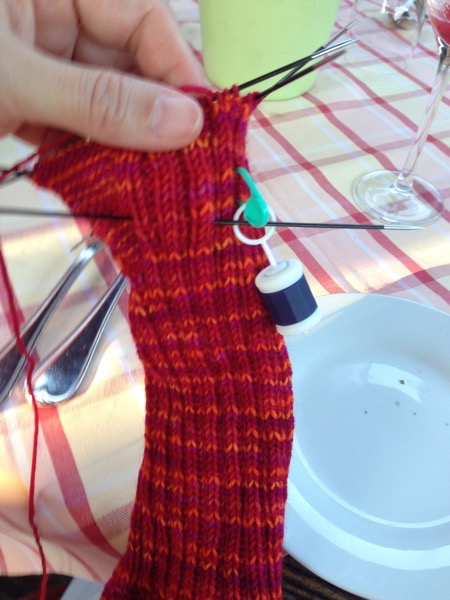 We had an aperitif and then carpaccio made from guinea fowl with baked tomatoes, mushrooms and figs (I was too hungry and impatient at this point to remember to take a picture before starting to eat): 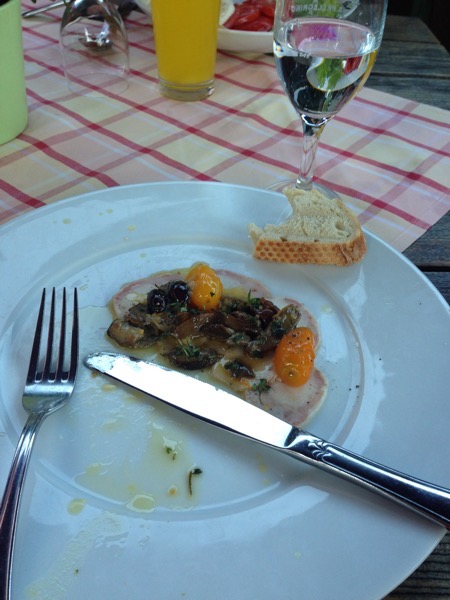 The waiter had forgotten our bottle of wine, when we reminded him he brought a glass of wine, and then he brought the wrong wine first. The boy had mozzarella caprese: 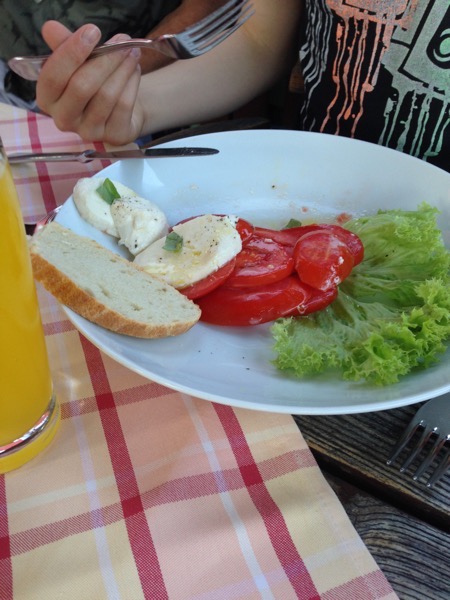 For our pasta course we had panzerotti with mushrooms and ricotta. The boy didn’t get anything at this point (he had ordered no meat course; no idea why they decided to let him sit hungry while we were eating our pasta – the waiter might have forgotten, most likely): 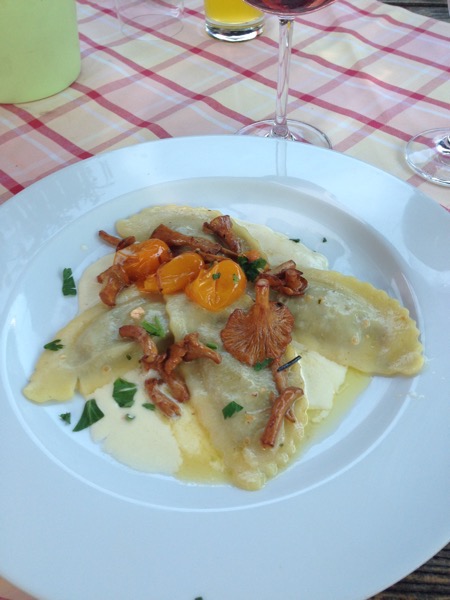 Then we waited for about half an hour again. Another waiter took our empty plates and asked if we wanted anything? We said that we had ordered the menu and weren’t done yet. He was a little surprised. A few minutes later our waiter re-emerged, brought us some more bread while trying to charm us and told us it would only be two more minutes now!

We think that he probably only ordered our meat then.

By then I was not hungry any more and tired enough to want to go home. But we waited a little longer for our veal with mushrooms: 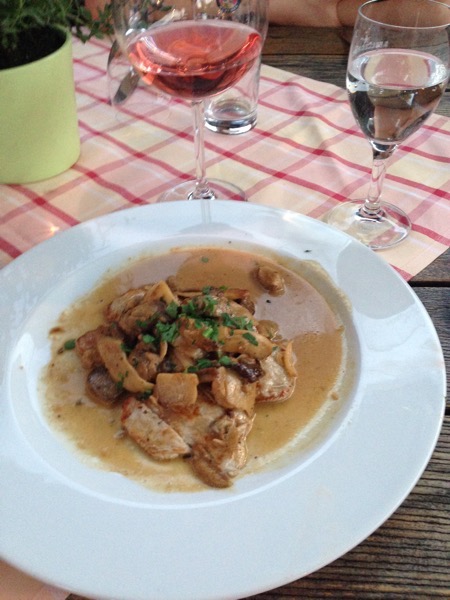 It was very tasty. The poor boy still didn’t have his pasta at this point and I found it interesting that we only got the meat, nothing else. We started eating, our waiter breezed by, saw the boy and said, „Two minutes, only two minutes!“ when he saw the boy didn’t have any food.

Then somebody else showed up with pasta for the boy (he had the panzerotti too) and – mashed potatoes, carrots and broccoli for us.

When I had told the waiter in the beginning that I would like my dessert without strawberries (I really hate strawberries.) he had wanted to discuss this at the end. No idea why he couldn’t have jotted that down and remembered but apparently that was not doable.

So when we were finished with out main course we sat and waited some more (the mood was not quite as nice at that point; behind us a family had started fighting over dinner which was a little distracting as well) then he came up saying, „Dessert!“ Before vanishing again.

We started hoping. At this point I was rather sure that I would get my dessert with the strawberries (mascarpone cream).

Then he came back with his notepad, „What do you want?”

Huh? We had the menu. There was dessert included in the menu. We explained that we had ordered the menu, that I didn’t want strawberries with my mascarpone cream and that the boy wanted just regular tiramisu.

„I’ll go and see if there is any mascarpone cream left,“ he said.

We did manage to convey that we’d rather have just regular tiramisu if it made no difference to him because with our fructose-intolerance both my husband and I don’t do well with fruit.

We got our tiramisu. It was good. The lunar eclipse was in full swing when we left. My husband said, „Next time I’ll just stand in the kitchen and do two courses instead of four and the food will be almost as good but we won’t have to deal with waiting for ages, car and motorbike noises, people’s perfume and cigarette smoke.”

Not to mention that it will be much cheaper.

This has been the first time that we were let down by that restaurant, every other visit was really enjoyable and the food is wonderful.

We walked home and the streets were full of people out to see the lunar eclipse. I looked at the blood-red moon for a bit and then I went to bed to elevate and ice my foot that is still looking iffy and that doesn’t like the heat.

Today I might not go for my run – because of the still infected foot – I will spin for sure and write a little and not do much of anything.