I’m blaming the Tour de France/Tour de Fleece but July has always been crazy around here. School year is almost over.

Since I had gone to sleep about an hour later than usual I started the day already slightly behind. I wasn’t the only one, though, the boy overslept. Since he has been coming down for breakfast later and later each day and I refuse to panic about him being late I woke him up just in time. I think. He might have been a little late.

They spent the day tidying their classrooms, so it’s not like he missed a ton of stuff.

I talked to my husband and knitted two rounds on the shawl, then went grocery shopping. This time I managed to find out where they stash the pine nuts. It is with the candy. Of course.

Also I found out that that grocery store has my very favorite kind of licorice in stock all the time! Bavarians don’t do licorice as a rule. It is hard to find around these parts but now I know where to get it and could get it every single week!

I will have to make rules so that I don’t. (Candy is one of the things that my body doesn’t digest well. So I better don’t eat too much of it.)

Then we had leftover lasagna for lunch: 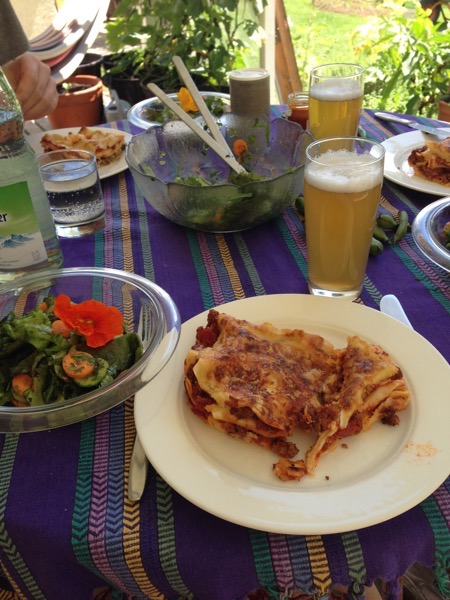 And salad. While I was in the grocery store my husband set off to the health food store because we were out of salad. He has planted some more but it will take more time. (It never occurred to him to call me on my cell phone, of course.)

Then I did the dishes with speed (and the boy helped me, yeah!) and proceeded to record the next podcast episode. (It will probably go out on Saturday, not today, by the way.) I rushed the end a bit because it was time for my student to show up for his customary 15 minutes too early.

Instead he didn’t show at all. As I told you. It is July, things are crazy.

Then I finally taught some students, carded more fiber for my spinning project, wrote a few words and went to bed a little earlier.

Today there will be cake for breakfast and teaching and a very light lunch because we’re going out for dinner! In between I’m planning to spin some more.