I’m not quite sure if that’s a good thing or if it’s just a slump that I’ll regret later.

And it wasn’t a complete day off, I still had to teach some students.

The day started a little different than usual because school started an hour later than usual for the boy. Which meant I didn’t really have my alone time after breakfast.

I made another doctor’s appointment, this time for a colonoscopy in August. Since I turned 50 it is time to have one again.

Then I went grocery shopping. Came back a little later than expected and then we rode our bikes to a nearby beer garden. School was out early and my husband and I didn’t have to teach until 3, and the weather was ideal so we managed to cross one thing off our summer break list early: 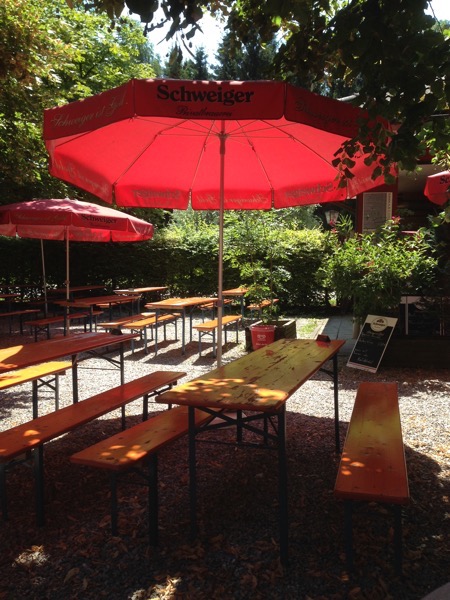 The boy and I had Obatzda and Brez’n and my husband wanted a pork cutlet with potato salad: 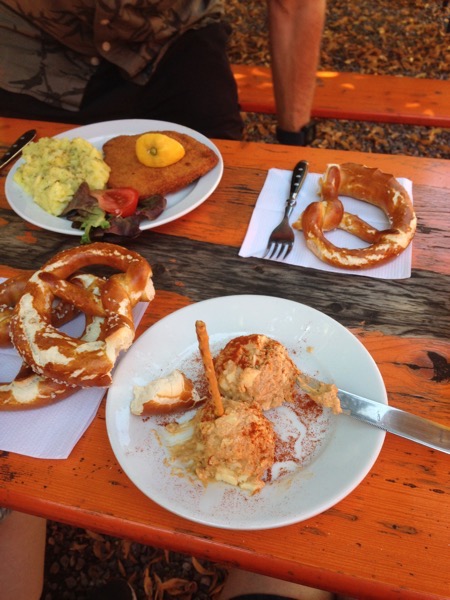 This is about as Bavarian as food can get. And of course there was beer. Not for the boy, though.

We biked home (my Fitbit said that I exercised for 70 minutes all in all with the walking and the bike) and since there was still time before teaching I not only took a shower but also sat down to watch the Tour and spin.

And after teaching I did the exact same thing again.

Until I remembered that I still had the breakfast dishes to wash and that my husband had started a load of laundry after lunch. So I took care of that.

And then I sat in front of the computer for yet another webinar. I know I am a little crazy. But who could resist something that’s called „Create a Six-Figure Author Business in 2018 Without Trad-Publishers“?

Yeah, I thought so. But – more spinning time!

Which was totally worth the time. For spinning. The presenter was telling us that we should pay 1,000 dollars for her awesome course which would give us 11,000 dollars worth of stuff and really, finding that 6-figure book idea would totally be paying for everything. Oh, and she threw in another bonus that only the first five people would get.

As I said, by now I do have an inkling on how selling works.

I just wanted to type into the chat box that ideas are a dime a dozen and having a great idea for a book means nothing. Most webinars I’m watching about book marketing at least tell you that the first thing you need is a well-written book.

I didn’t type that in because I don’t think it would have done anything. I’m trying to be polite these days.

I am writing a note to myself that I really should stop watching these things.

Today there will be the rescheduling of the boy’s dentist’s appointment next week, the cleaning of the house, a little teaching, and the helping with making pizza, I think.