I woke up really early, like 5.20-early. Wrote my morning pages. They felt endlessly long yesterday. Tried to write before breakfast, decided to do my daily update on Ravelry first, tried putting a picture from my blog into the post I was writing and, bam, my day got derailed.

Because my blog was offline. „Database connection error“ which is the same error that my husband’s blog has been showing for weeks now. The one I haven’t taken care of because it wasn’t a top priority for me. My own blog, though, immediately became top priority. (To be fair, my husband hasn’t posted in ages and the blog was hacked a few years ago and while I got the posts back up not everything was working properly. But he didn’t mind. I should address that problem in the next few weeks, though, because he wants to start posting again.)

So. Customer service opens at 9. Which is sensible, I mean, who wants tech support at six in the morning? So I wrote them an email. I decided that would be the better option. Instead of sitting next to the computer waiting for a few hours.

I had breakfast, I tried writing but only was able to focus for 2 1/2 minutes, yielding me a total of 69 words, 29 of which I deleted immediately. My husband showed up for breakfast, I knitted a bit, did the dishes, put on makeup and got ready for my hairdresser’s appointment.

I walked to the train station as fast as I could because I had forgotten that I needed to buy a ticket first. Reached the station three minutes before the train was supposed to leave, money in hand for the ticket. There was only one ticket machine in operation. There were two women before me. I changed money for one of them, helped her buy her ticket, told her that yes, she could use the same ticket on her way back while frantically punching buttons and trying to wrangle the ticket out of the machine. Stamped it, pushed the button that opens the train doors (it was still glowing green) but the doors didn’t open and the train pulled away without me.

Which made me late.

The next train was two minutes late on top of that (trains only go every twenty minutes). The good thing was that I would have had thirteen minutes to spare with the original train, so I was exactly seven minutes late for my appointment. Which was no big deal, I had to wait for ten minutes while she finished someone else’s hair first.

Now I’m basically looking the same as before with better bangs: 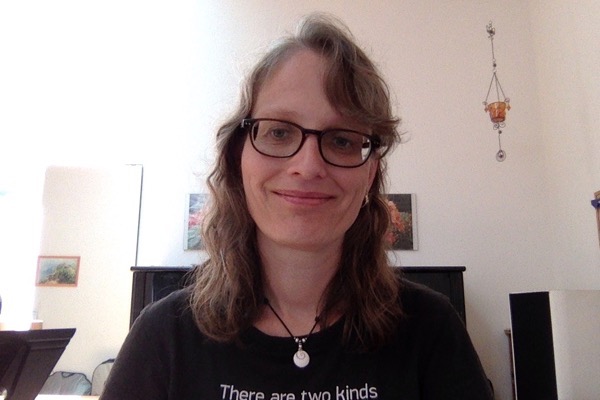 I still haven’t mastered the art of the selfie.

Then I ate a rather late lunch: 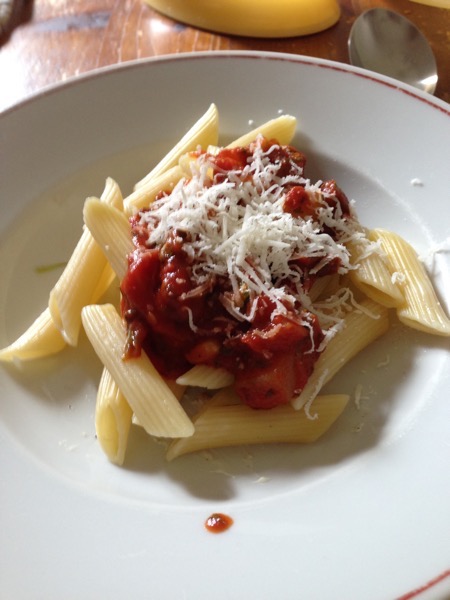 With some chocolate on the train, some fried zucchini blossoms before, this pasta with zucchinis and tomato sauce and a lot more chocolate afterwards.

Dishes. Teaching. Had a pretty enjoyable lesson with the two very young ukulele students who had been on the verge of giving up just a few weeks before. Phew.

Then another attempt at writing (I’m not giving up!) and then watching the World Cup with my husband. I thought I’d spin while watching soccer instead of bike riding for once. That was rather enjoyable. The game was really good and we talked quite a bit and had fun. 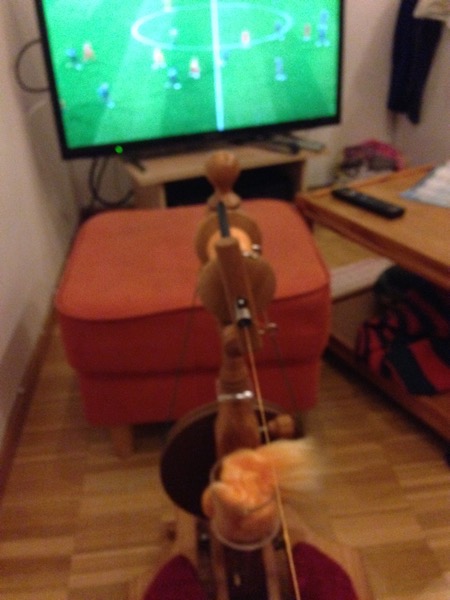 To bed a little too late.

Today there will be running and stranding and all the usual and teaching and – probably more soccer.