So it was clear that that would be a very busy day but at least I did sleep enough.

And then I felt all mushy in the head, as one does after the first night of decent sleep after a lot of bad ones.

The low energy lasted until the afternoon. I still went for my short run but it was more of a walk than a run. Well, at least I did get out there.

And I tried writing in the morning but it didn’t go well. I think I need to scrap the last two scenes I wrote and go into a different direction.

I also looked at my progress and the fact that so far it has taken me 148 days to not quite finish this story and that I wrote 549 words per day on average.

Now I tend to plan as if I can write 1,500 words per day easily but if I look at my history so far that is dumb planning. I won’t work. Not with some serious change and it’s not like I haven’t attempted that before.

So maybe instead of feeling really bad every day for not reaching my goal it might be a better idea to adjust the goal.

I’ll tell you how that goes.

Lunch today was completely different from the Greek food fest of the past two days: 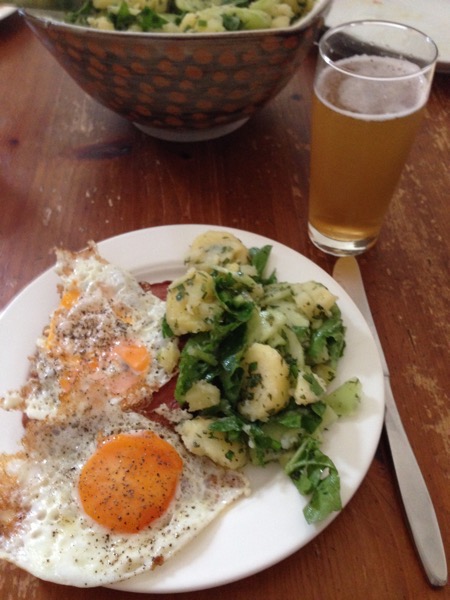 You can’t quite see the Leberkäs underneath the eggs but it is there. And that’s potato salad (Bavarian potato salad, not like the one my mother makes at all) with cucumbers from the garden and herbs and some rucola (the rucola is not traditional but tastes great).

Then I set out to teach all afternoon without a break. And the teaching went well. And one student called to cancel so I did have a little break in between.

And then the boy practiced piano and then I spun the rest of the orange fiber and plied the orange and yellow together so in a few days I will be able to resume knitting the mystery shawl.

And then it was too late to do any more writing. But I did manage to turn out the light before 10 pm.

Today there will be another run and maybe an errand or two (didn’t do those yesterday) and a medium amount of teaching and some more thinking about writing and goals and plans.