Yeah, I actually slept until the ungodly hour of 7.30 yesterday. Which sometimes happens ifI go to bed after midnight. If I’m lucky.

So the day started a little off routine, of course. I might not have meditated.

I wrote my blog post later than usual and wasn’t quite finished when my husband showed up.

The boy came down for breakfast on time which might be a first.

And then – we started cooking lunch. Right after breakfast. Because my husband had had his idea of making our own Greek wrapped vine leaves. And some more things. So he cooked the rice and the leaves and then I wrapped them because I’m always the one who has to do the fiddly stuff, and since there was a lot of leftover rice he decided to pick a few bell peppers from the garden and make stuffed bell peppers and we had tsatsiki (cucumber from the yard and garlic) and since we have dozens of eggs sitting around we cooked some of those, and since you really need some pita bread to go with all of that I made some, and we also made bean salad from dry beans put on the stove around 9.30 that morning.

We actually spent all morning cooking.

The food was really good. 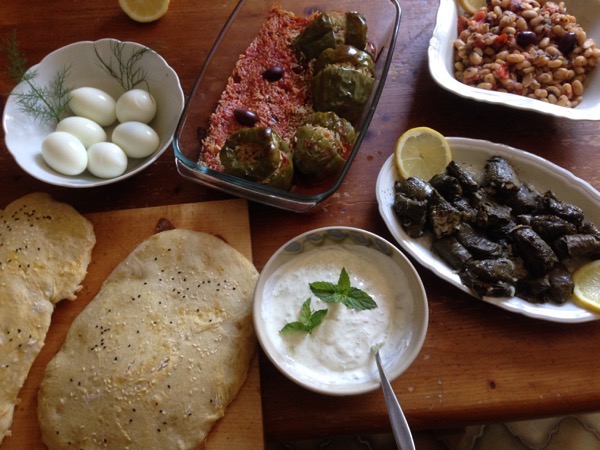 And it was warm enough to eat outside, if a little windy: 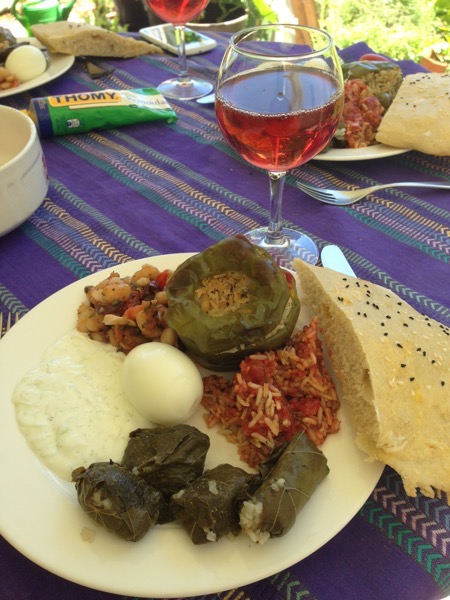 I sent my mother the second picture and she asked me if we had eaten all afternoon because we had so much food. I still don’t really understand that because that is just my plate with my lunch on it.

We did have a lot of leftovers which is only proper and will have those for lunch tomorrow. With added pasta and Greek meatballs.

Then there was a humongous dishwashing and then I made some more jam. Only 4 1/2 jars this time. I didn’t even take a picture. I’m almost done with the jam-making for the year. Only apricot now, and I need to remember to buy some. We do have a tiny apricot tree but we only planted it this year so no apricots yet. If ever.

Then I played the video game that I bought the day before and put my foot up because I seem to have and infected insect bite that is really bothering me. It’s sitting right where my house slippers rub and so it got pretty bad before I realized what was happening. The only shoes that don#t aggravate it are my Mary Janes and flip-flops so I don’t think I’ll go running today.

Oh, and no writing yesterday either. Which tends to happen after parties and such. All the more reason not to got to them, I guess.

Today there will definitely be writing and maybe some music and more spinning, and the usual teaching and I’ll go to the pharmacy.

Also, getting enough sleep is very high on my list right now.