Ugh. That was one of those days where I procrastinate about the writing all day long until after bedtime. Did manage to write 600 words in the end. Yay me?

There was the playing of a new game on my phone, and then a slightly late breakfast and meditation and the usual. And then I deleted the game from my phone again because I decided that that is not where I want to spend my time. And I finished a sock and started the second one, and then I went grocery shopping.

I think I have found a packing method that works without leaving me frazzled. You see, I was always trying to cram all my groceries into my bike panniers as fast as the cashier could push them over while at the same time packing sensibly. Like putting all the frozen and cool items into the isolated bag I had with me. But that never worked and left me frantically throwing stuff into my bags while the cashier was tapping her fingers waiting for me to get my stuff out of the way of the next customer.

So yesterday I decided to not be as efficient as I can but instead to reduce stress, and so I just put everything back into the shopping cart, and then I pulled over to the side and packed my bags in a more leisurely way.

I will go back to using the bike trailer and the boxes, though. It is much easier to ferry all that stuff around that way, and the packing is easier too, and nothing gets crushed. But I have to walk quite a bit between the supermarket and where my bike is parked. And I can’t carry two boxes that far. Well, mainly because I can only ever carry one of those boxes at a time without anything falling out.

Of course I would risk that someone steals my cheese but I guess that is not the most likely scenario.

I came back, I put all the groceries away in a hurry, and then helped making lunch. I was dicing and slicing veggies and preparing herbs at high-speed. We had our traditional pasta bolognese, for once with tagliatelle instead of spaghetti and a salad that was mostly herbs: 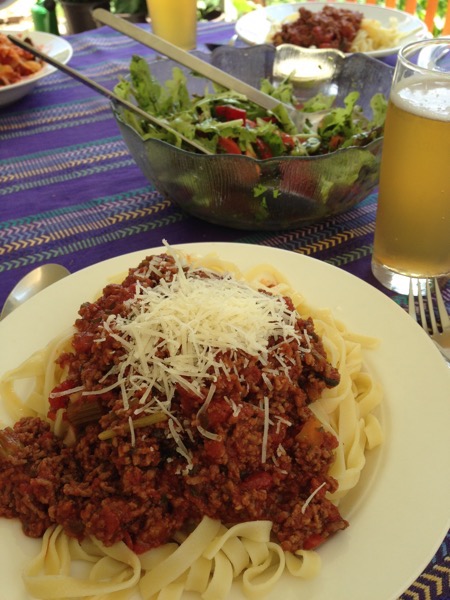 Then I procrastinated for an hour or two, then I taught some students, then I procrastinated some more, spun the daily portion of fibers, finished watching that house-building show I had been watching for the past week, started watching „Arrow“ and then I opened another beer, ate quite a bit of cheese and finally sat down to write a few words.

Went to bed too late.

Today there will be the weekly cleaning, much teaching, the pizza making, some writing, some music, quite a bit of spinning and yet another webinar. I don’t really think I’m addicted to them but there sure seem to be a lot of them. This one is about platform building for authors, and no, this has nothing to do with wood and nails.