Of course, after a very good day the day before I started yesterday not quite as good. Everything went pretty well until I just couldn’t bring myself to write after breakfast. I was also very keen to finish the novel I was reading and didn’t want to put it down.

I went running again, for only 3.2 k and it went very well. The run was so short that I didn’t even take a picture.

There were pancakes with spinach for lunch and the weather was nice enough to sit outside again: 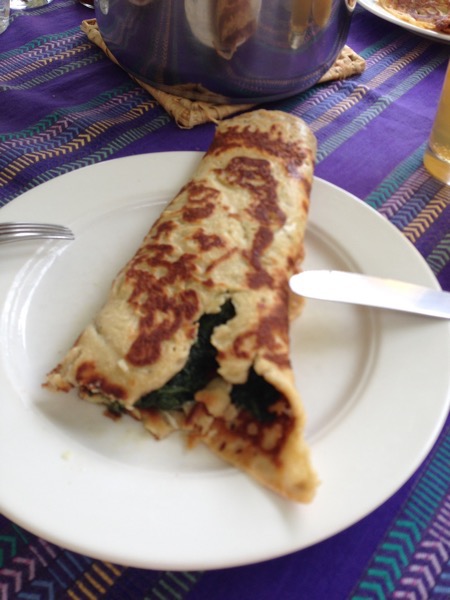 While we were eating the boy showed his hands and said, „Look! There is skin between my fingers again!“ Apparently the creme is working and his eczema is healing. I have been forcing him to apply the creme three times a day, reminding him constantly, and now I hope he’ll stay on top of it.

Then I did an enormous amount of dishes, sang a little and finally managed to force myself to write. The problem had been that I thought I would write the big kidnapping scene today but it turned out I need something else first.

I am having a suspicion that this will be a rather long story after all.

I taught quite a few students and had a potential new ukulele student call me which is very good. Then I talked to the boy some more. I think he was in a pretty good mood because his dreaded German test was over as well.

I did spin up the second quarter of the yellow fiber. If I keep this up for the rest of the week I should be able to swatch on the weekend and start knitting next Monday when the knit-along starts in earnest. Of course, then I will still have to spin the second half of everything. But I’ll have more time for that because I’ll be knitting for six weeks if I remember correctly.

The early to bed.

Today there will be more running and quite a bit of teaching, and more writing and spinning. Also plying.

I have to say that I’m somewhat glad that I’m still skipping dinner because it gives me an additional thirty minutes of time per day. And I’ve done well on the ‚no binge-eating and no alcohol‘-front for the past two days by staying out of the kitchen in the evenings. Turns out it’s much easier not to eat and drink anything when you’re not sitting there  surrounded by food, smelling the bread right behind you.