Woke up a little too early yet again and didn’t write in the morning – again. Instead I researched all kinds of things, one of them having to do with the fact that my new! Shiny! Fitbit isn’t working quite as I wanted. There is nothing wrong with the Fitbit as such but there was an update to the Fitbit app two days ago, which I dutifully installed, and since then I haven’t been able to access the apps and clock faces for the Fitbit through the app. Which means – among others – that I’m stuck with the weather app not displaying any weather and with a two day old to-do-list. At least the to-do-list is only on my Fitbit. I could update my paper bullet journal just fine.

Well, it seems to be a known bug, there are oodles of posts about this in the appropriate forum so I’m hoping that things will be fixed soon.

I spent my morning with my husband and preparing for the podcast, then there was lunch. Here is your obligatory lunch photo: 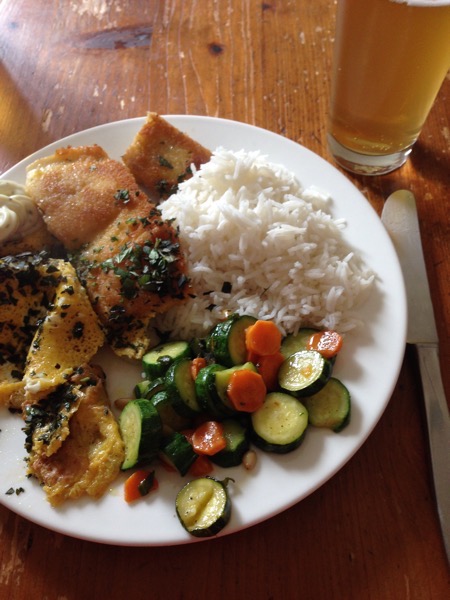 That is fish and rice and – most important – zucchini from our garden.

Then I set everything up for recording, carried all my projects into my studio and recorded the podcast. I had the feeling that I needed to hurry at the end even though I had fifteen minutes before my first student was due. When I opened the door he was already sitting in the hallway. My husband had let him in.

Then I taught more students, started preparing the podcast for publishing, spun a little, attempted to write a little and went to bed on time for once.

Today there will be cleaning and more work on the podcast and maybe even cross-training and then it will be the weekend.

Which is blessedly free from obligations.