At least I was not quite as tired as I thought I would be.

I decided to restart the sock I had started the day before because I didn’t like the way the yarn was pooling. I briefly knitted with 1.2 mm needles using 68 stitches instead of 60 stitches on 1.5 mm needles, and then decided that I actually wanted the 68 stitches on the bigger needles. Here is a picture of the sock before ripping back, I did have a nice, lazy and cozy morning with a good book: 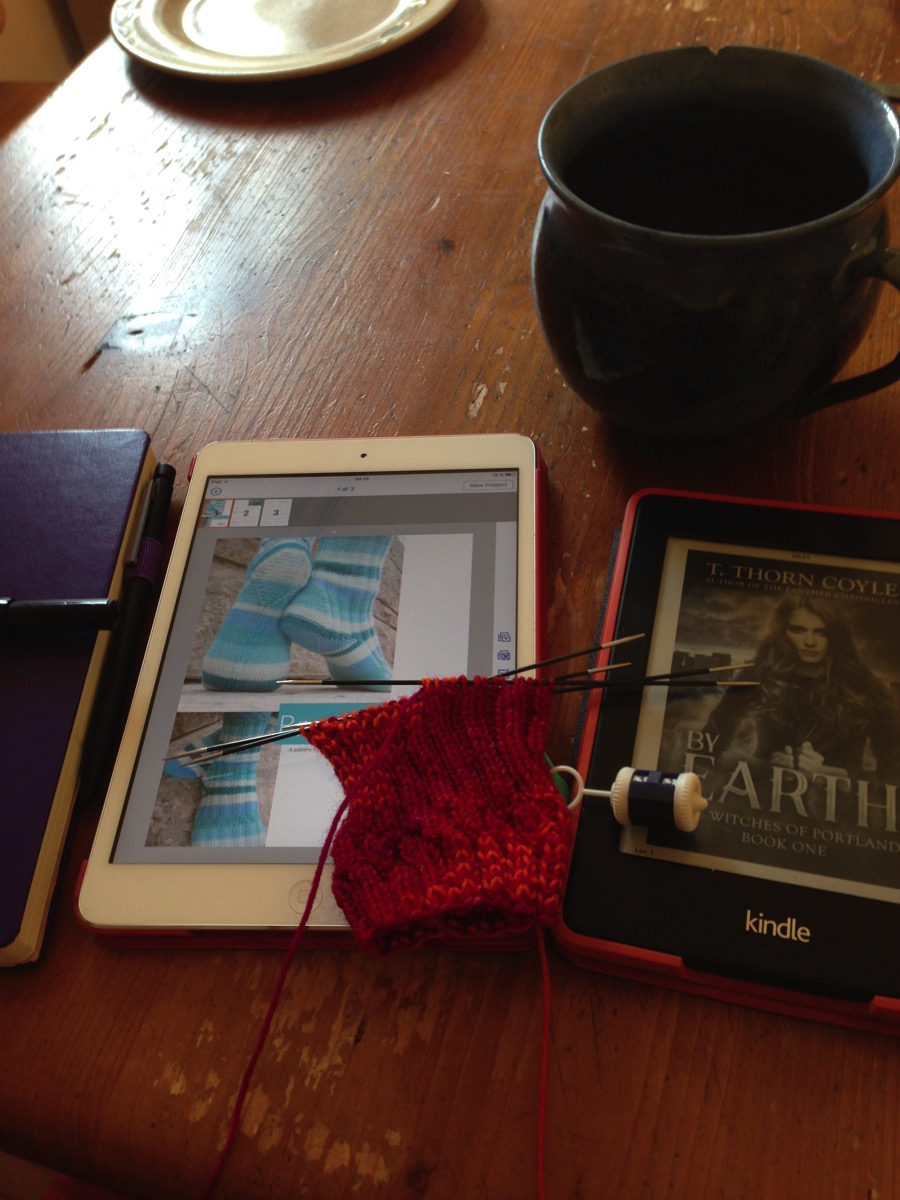 And I’m just realizing that you can’t seen the color at all in this picture. Sorry. Wrong light. The yarn is actually bright orange, red and fuchsia and the lighter bits there on the picture are the orange breaking up and being all over the place. My husband just shook his head. He thinks I’m foolish to rip back things so often.

I’m much happier now with the colors. I will probably go back to the smaller needles after the heels. And the pooling will change anyway when I’m increasing for the heel and then on the foot there will only be ribbing on the top of the foot, not the bottom, so that will change things up again.

And the longer I take to decide the least likely it will be that I can spin the yarn for this. I might have to toss the stash but, as I said, I don’t think I have anything that qualifies.

(I just looked and the nearest store to me that sells the yarn suggested in the pattern is in Finland. And I actually held two skeins of this in my hands last Saturday. They were, apparently, 27 Euros each. Um, no.)

I am almost regretting committing to this. It’s not as if I didn’t have enough challenges in my life. All voluntarily, but still.

But then, not having the right yarn is not that dire an emergency. I will figure something out.

My plan was to either write like crazy yesterday and/or sort through all the piles in my bedroom.

In the end I washed all the wooly things. A whole load of wool things in the machine and four skeins of handspun in the sink. (And no, none of that yarn is suitable for the KAL.)

My original plan had been to just buckle down and mend away, or at least do something but some how the day got away from me. That is happening a lot.

Still. I started the process of sorting through the piles. That is good. I am imagining how great I’ll feel when they will all be gone. Might take a little while, though.

I am also working on my mindset like crazy (why yes, I am reading self-help books again, sorry) and am formulating a plan for the writing. Which didn’t involve a lot of writing yet again but next week will be better. Of course it will.

Today there will be the running and the teaching and the writing and I have great hopes of playing the piano even. I stumbled upon a Brahms waltz (I’m reading Austin Kleon’s blog, like you should do too.) that I know in and out but I don’t think I ever played it. Which is a little freaky. Anyways, it looks pretty doable and like it might be a good piece for students to work on, so I decided to learn that. Starting today.

And then I will be trying to make this week better than the last one. Write at least twice the amount of words, make music every day, and floss every night. You know, the usual Monday resolutions.

But I just read that successful people are mostly people who don’t give up (the words tenacity and grit were frequently mentioned) so I thought I’d just continue trying. Until I either succeed or die. Whichever comes first.