This day was not much different from the ones before.

With all the bad runs I had that week I had decided to stop the half marathon training and instead focus on my gait and on running in a way that my heart rate doesn’t stay uncomfortably high all the time. So I looked at several running apps, all of which wanted me to pay for a subscription before I could put in my own running program. I don’t want to subscribe to any more things. So I remembered an app that I had bought years ago only to find that it didn’t really work with my iPod. But now I do have a smartphone so I could use it. It is an app that helps you getting from running 5k to 10.

In a way I don’t really care what distance I run, and I only care about my pace because it’s so extremely slow. Just the fact that I can run at all is still a miracle to me.

A few weeks ago we met a friend and started talking about running and she said, „Well, I guess you have to be the right type of person for it.“ And that still makes me laugh. I am so not the right type of person to be a runner. I find it hard and uncomfortable, my hips mostly don’t like it and after more than ten years of running I still can’t run 5k without feeling like giving up any minute now.

I do run because I like the idea, and when I can forget how much effort it takes it feels really cool. And I have envied people who can run all my life. I don’t like being envious, so I et out to become a runner myself. I love being out in nature four times a week, even when it’s raining and snowing and too hot. (And if you had told me that I would say that just four years ago I wouldn’t have believed you.) I love the fact that I don’t really need any equipment for it, apart from my really expensive running shoes, and that I can just step out the door and start. And my husband runs as well, and even though we don’t run together because he is a lot faster than me, and is content to run the same loop every time, we do mostly run on the same days.

So I did this new program, one that only specified how many minutes of walking and running you had to do. I thought that blocks of ten minutes of running and one minute of walking might be challenging but doable. (And yes, I am still walking a lot on my runs.) Then I started and I felt fine. And seven minutes later I didn’t feel fine at all. I felt a little weak but not in my legs, I felt like I couldn’t breathe and like my asthma was back a little.

Still, I had promised myself to run all the running intervals without fail.

Halfway through the run I felt like sitting down right there on the side of a field and crying.

This is how nice it looked there: 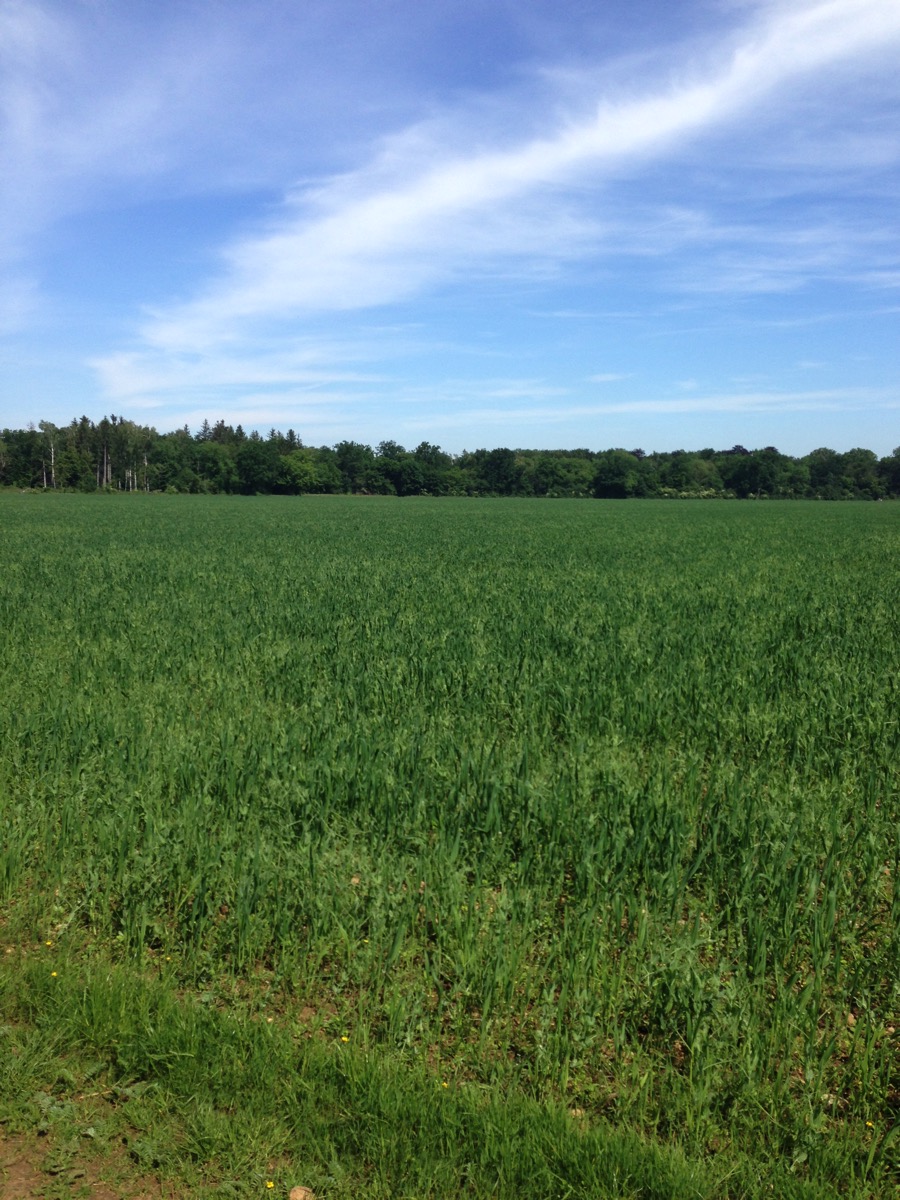 And this is how I looked there: 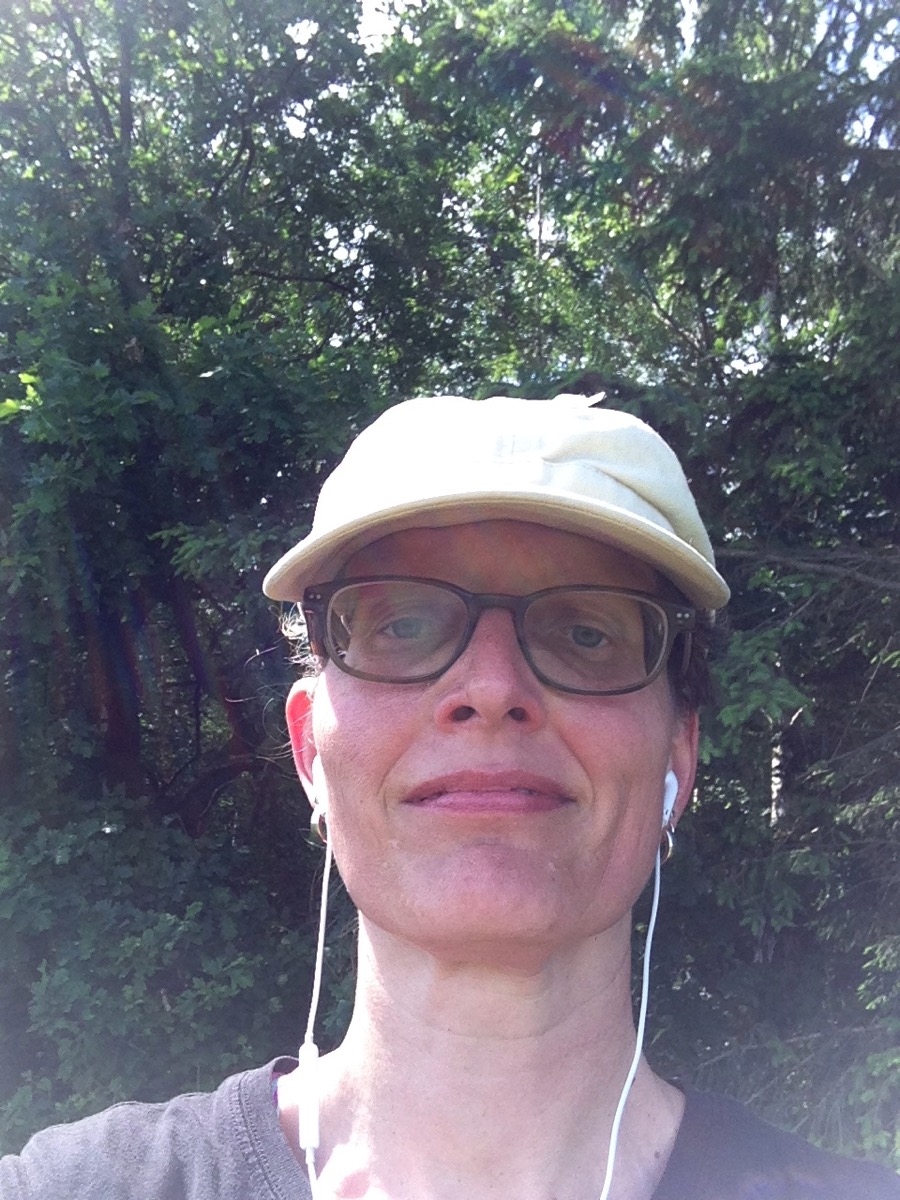 After that things went slightly downhill. I didn’t want to sit on the side of the field because I had to at least walk home anyway. So I did that with very few and short attempts of running in between. And I wondered what was wrong with me.

When I came home my husband (who had run almost the same loop) said hello and then, „Did you notice that it smelled like mold all the way?”

We had very warm weather with thunderstorms and a little rain all week. Mold loves it damp and warm. And I happen to be allergic to mold. And I had gone back to taking my allergy medication only every other day because there hadn’t been as much pollen in the air.

It also explained why I didn’t smell anything. My nose shuts down when on overload.

So I wasn’t having asthma again. It was just allergies.

So I’ll try again on Monday, with allergy medication, and I think things will go better.

The rest of the day was rather chilled, the boy went out to see a friend (we should put a big red x on the calendar because he left the house, second time this week even) and I sat down to spin in front of TV again: 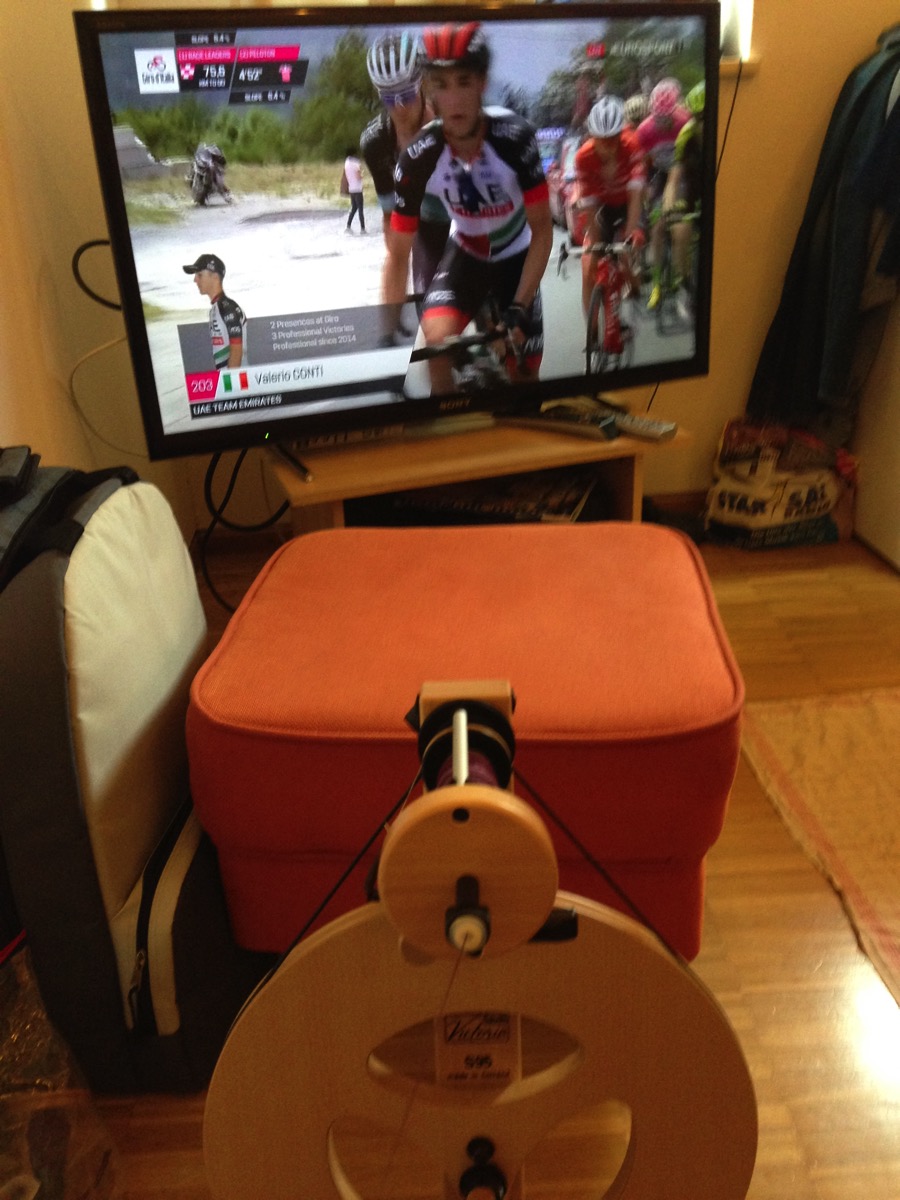 I had finished the brown merino the day before and spun the last of some purple merino for a possible lace cardigan. I am starting to make my way through unfinished spinning projects.

Today will be more of the same, talking with my husband, knitting, reading, spinning. I haven’t written for days now and I hope to get back to that today.