I woke up too early, of course. My husband is still in a really bad and overwhelmed mood and I didn’t write because I thought I would have enough time later.

Note to self: there is never enough time later.

There was breakfast, rather late, and reading, and the boy even got up at 9.30. And I didn’t meditate which is the new normal on days without school. We all talked a lot and so I went running rather late. (Sorry, no picture this time. I ran the exact route I run every time and it pretty much looked the same as the day before.)

There was delicious food (as always). By now my husband reminds me to take a photo before tucking in: 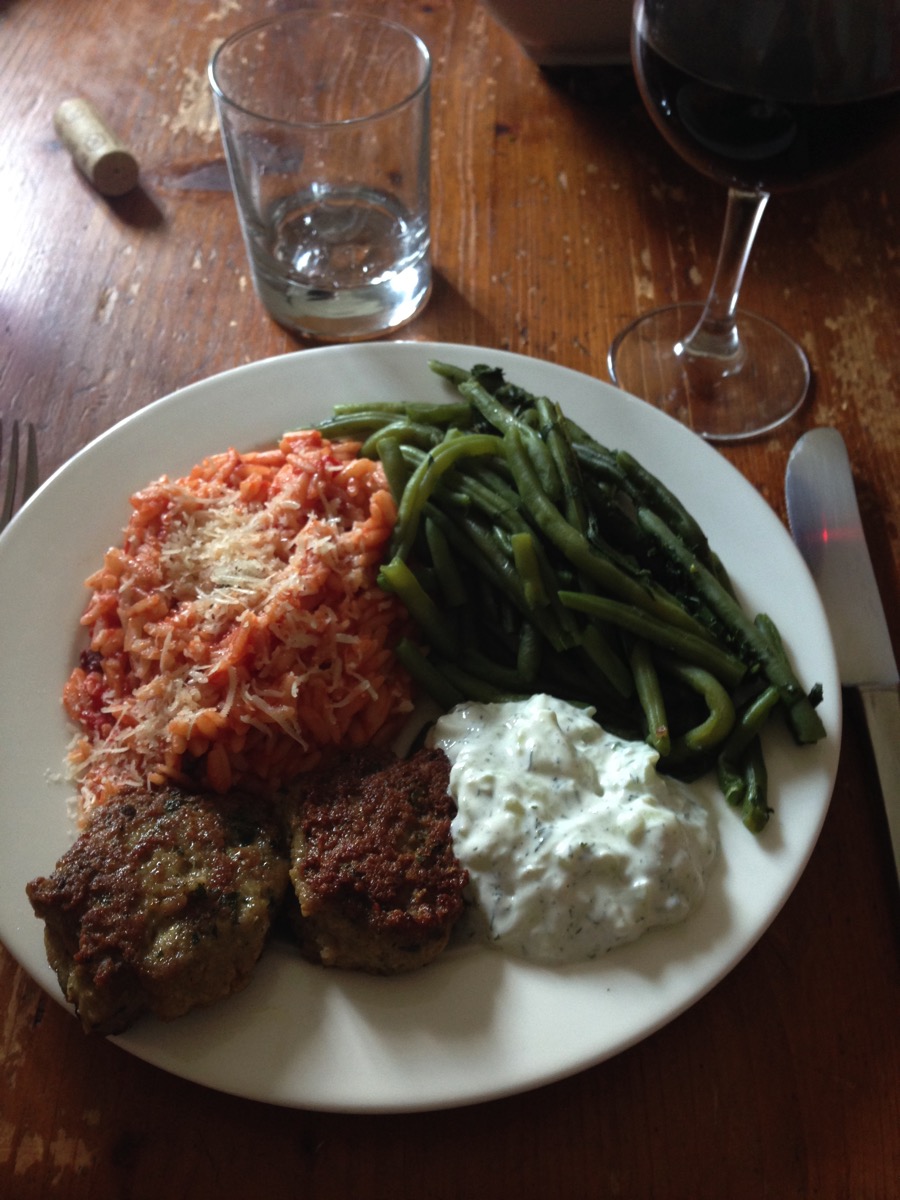 After lunch I taught my one student for the day. That student is the only one who takes guitar lessons from my husband and additional singing lessons from me, and he has exams at the moment because he is finishing school, and so we decided to have him come in on the holiday for his two lessons.

I did manage to wash the dishes before the lesson, so that was a win.

After the teaching I sat down to watch the Giro d’Italia and spin. I have now successfully re-plied a little less than half of the green polwarth. Woot! Doesn’t feel like a big accomplishment because I still have quite a bit to go.

Then I spent almost an hour with emails, blogs and ravelry and found out about a webinar on making good habits stick. I signed up for that and found out that it was on the same day at 7 pm.

So after hanging up a load of laundry, the boy and I watched an episode of „Star Trek: The Next Generation“. I have to say that season five is really, really good.

Then I watched the webinar.

Well. Let’s say that it took only 37 minutes and also I started the gauge swatch for a new sweater. And no, 8mm needles don’t work for that yarn for me. It was worth a try, though, and while the color of the yarn (mostly alpaca, it is really luscious) is not right for me it is so super soft that I don’t care.

Then I wanted to spend the rest of the day (about an hour) trying to at least write some words but then my husband had the strong impulse to talk to me, twice, and then I gave up.

And he had been waiting for rain the whole day but there was none – it has been way too dry the last few weeks – and then he decided to fill one rain barrel to the brim from the hose, and then it started to rain, and when he tried moving the full rain barrel away so that he could place the other one under the spout it broke and he hurt his thumb.

Which is why he then came back and told me all about it.

Well, today is already looking pretty good from where I sit. There will be the ritual cleaning of the house on Friday, and the changing of the sheets. There will be music and writing (yes, this time for sure) and also my husband and I will go out for lunch while the boy gets to munch on frozen pizza. I talked to him and apparently he doesn’t mind. Because it’s a regular Friday and I have to start teaching at two the timing would be rather awkward for the boy who gets off from school at 1.10. Which means he would joins us at around 1.20 and then I would have to leave at 1.45. Which is not quite enough time to enjoy your meal at a restaurant.

So my husband and I will leave here at noon and be at the restaurant around 12.15 and then we have ample time for food and conversation. (And several ouzos that we will get pressed to drink.)

So I better write all my words before then.

Then I will teach a few students and in the one-hour break that I have I will attempt to bake muffins for tomorrow’s spinning meeting. And then teach the boy. And watch some more Star Trek, I think.