Well, I already feel very geeky having gotten my very own domain and server space and having installed my blog all on my own. (Interestingly this feels more geeky than having installed my husband’s blog. Weird.) Also for my birthday I got a couple of ThinkGeek tees and how much geekier can you get than that. I have been running around in t-shirts with jokes I had to explain to everyone by the way. And then they didn’t get them anyway. Jokes like, “There are 10 types of people in the world…” But maybe one only gets this when a) being involved with computer programming and b) having started working with computers at a time when everyone had to learn binary.

To prove my geekiness I can proudly tell you that I almost had followed a career as a computer programmer. Really. Just when I had earned my MA in music education I was offered a job as a programmer. I chose to become a college professor instead and, well, that didn’t work out as planned.

My beloved PDA had shown signs of heart battery failure for some time. It started about a year ago but with a hard reset (and the loss of all my financial data) his health was restored if not to its old height then surely to an adequate level. A couple of weeks ago it started again. I had to recharge it once or twice a day. Well, I knew what to do, hard reset again (this means wiping the whole hard drive of the PDA and restoring all programs and data), but – nada. The problem persisted.

I talked to one of my students about it, a teenager who collects PDAs and small computers and who put a screwdriver to his sparkly new cell phone, and he told me to change the battery. Easy option one would think but, to be frank, one not encouraged by the manufacturer of that PDA. He advises you if ever your battery should be faulty you should send the PDA to the company to get a replacement. That would have been an option if it hadn’t involved a) being without my PDA for days, maybe weeks, and b) paying at least half of the price of a new PDA.

I would have opted for buying a new PDA but then they aren’t cheap and the new ones don’t come with cameras or microphones. Well, to cut a long story short (and you thought I couldn’t do that), I ordered a new battery and – tada! – put it in my PDA, and – tada again! – it still works beautifully.It was all very exciting. First I had to wait for the battery for ages. Long enough for the original battery to fail completely so that I lost ten days worth of data. (Always do backups, always do backups, especially if you already know that your machine is having battery problems.) Thankfully it was a slow week and the main thing I lost was the record of how much I weighed that week. Because I weigh myself daily and put the weight into my PDA which then shows me a little graph. It had been going up anyway and so I didn’t care that it was lost.

When I wrote an e-mail to inquire about my battery I found out that while they had recorded both my order and my payment the had then mysteriously failed to connect the dots and to ship anything. Ah, German customer service! I received a reply saying, “We have received your order. For mysterious reasons the battery wasn’t shipped. It will be shipped today. End of e-mail.” Now, this is why I love ordering overseas. While I hadn’t expected the PDA parts store to wrap their goods in pink tissues paper and include a handwritten note like HagRags or u-handbag or (there are exceptions to German customer service) Woll-Sucht I would have appreciated a “Sorry for the wait.” immensely.

Well, my battery arrived on Saturday. I demanded quiet and peace and while my son and husband were occupied with soldering new electronic parts into electrical guitars (Really, I kid you not. Well, my son wasn’t actually soldering anything, he is not quite five after all.) I spent about thirty minutes prying the label from the back of the PDA. If I ever plan to do that again by the way I won’t remove the whole label but only cut away a tiny part of it. (There are instructions here and here. They are very helpful, especially when you read them both through before starting.) The next problem was finding the right screwdriver. Since we inherited something like a whole electronics workshop from my husband’s father I was sure we had the right screwdrivers. But I was wrong.

That day I was very grateful that nowadays shops in Germany are open on Saturday afternoons too because just ten years ago I would have had to wait until Monday morning. So I bought three tiny screwdrivers and some wood for our stove. Came back and spend about an hour or so trying to open the casing without breaking the whole thing. This is how the inside of my PDA looks like: 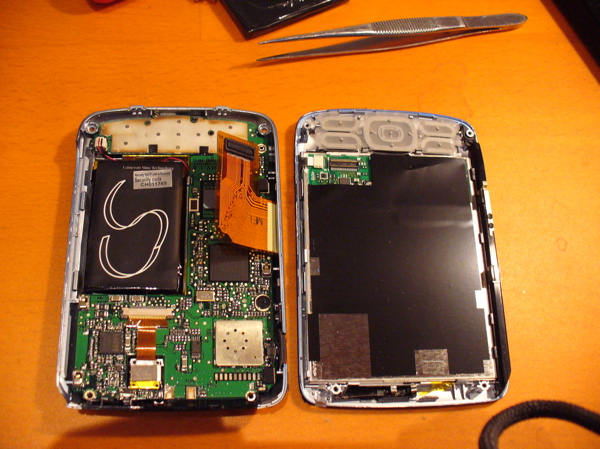 The other thing we didn’t have was double-sided tape. So if I ever open that thing again the battery will clonk out. But I doubt that I will. The life of a PDA is short. I have learned that it is supposed to last for three years if used between 20 and 40 minutes daily. Mine has been used much more than that because I used it to listen to MP3s and play games on it too. By the time the new battery gives in there probably will be something else wrong with it. But maybe not. We’ll see.

So. Are you a geek? I’d say everybody who is into blogging qualifies. Or not? Discuss.

Speaking of discussion I’d like to remind you of the Just Post roundtables for October. If you have written or read a post about matters of social justice, please send me the link to diapersandmusic at web dot de until the 7th. On the 10th Mad, Jen, Hel, and I will be putting all the links up again.