That’s what I did on Saturday. But we didn’t have eighty people over for dinner. What we did was prepare lunch for the next month or two.

I’ve tried, no, we’ve tried to make the holidays less stressful for years. Flylady and her “Cruising through the Holidays“-program helps, but I’m always looking for ways to streamline everyday home maintenance so that the important things in life get more room. So I decided to try out the Mega Menu-Mailer. It’s a variation of the freezer dinners obviously available in the US where you go to a place and assemble a couple of dinners to freeze. I thought it would be marvelous if we had everything for dinner for the whole month in the freezer.

Well, in the instructions it says, “Shopping may take one to two hours”. Yeah. I thought about this for days, made the list one week before, pre-ordered meat at health-food store on Monday, they phoned me with questions, had to go to the store again the day after, pre-ordered the fish on Wednesday, went shopping at the regular grocery store on Thursday (one hour, this time taking the car), went shopping again on Saturday for the fish, the meat, vegetables that I wanted to buy at the farmer’s market and to the regular store again for things they hadn’t had on Thursday. Already exhausted from reading? Look at what my kitchen looked like on Saturday afternoon: 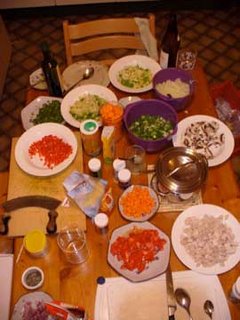 I wish I had thought of taking pictures of the meat. Heaps of meat. And my poor husband washed it all. We started preparing at half past three. The manual says that it took people two to three hours to assemble the menus. Well, maybe the assembling only. We spent about six hours washing, cutting, grinding, assembling, mixing, labeling freezer bags, washing up. Maybe it took a little more time because our son “helped”. But he was really sweet. We got a little panicky when we realized that our son’s bedtime drew near and he hadn’t even eaten dinner. He helped himself to a yoghurt. I was beyond feeling hunger since I was the “brain” of the whole enterprise. The only one who was able to read and understand all the instructions. Though my husband’s english is very good, he’d have needed a dictionary. You don’t learn names of spices and vegetables in school. It also took us longer because we had to convert all the measurements.

So, with the whining and the grumbling out of the way, I’m really pleased. We started this to prepare a month of food in advance and then realized that it will last us much longer. You see, we’re not four people in this household. We’re two and a half or so. So, if everything goes right (and the freezer doesn’t roll over and die), we’ll be having delicious fresh meals every day until Christmas. And they will take only little time to prepare. I’m already dreaming of the yumminess.

And I’m really relieved that my husband (though grumbling a lot on Saturday, “I wouldn’t have agreed to this if I had known that it would take that long.”) said things like, “You know, maybe we should do this every year to de-stress the holidays.”

So, what have I learned so far?

What kinds of things do you do to prepare for stress-free holidays? And do they tend to work?