Yeah, the concert is over. I’m quite proud and believe the audience liked it too. For almost two hours I played Tori Amos-Songs. The moment I started playing I realized that probably no one knew Tori Amos before. Apart from one of my friends whom I’d given a couple of CDs. So between songs I talked quite a bit. 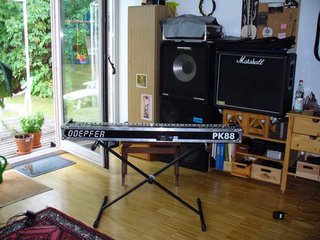 Before I began my stage fright was so enormous that I thought I’d be getting sick. Afraid and paralyzed I spent half the day in front of my computer and implemented nice new features into my blog (New! Improved! Better! Subscribe via e-Mail now!) Then setting up and sound check became inevitable. To tell it in front, after sound check I was about to cancel the whole thing. 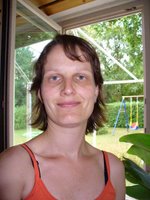 I played in my husband’s music room (Yes, we do have two music rooms, it’s where we’re working). It’s the biggest room and the one with the PA. (Yeah, another acronym, public address, the amp and speaker system). We (my husband and me) set everything up, plugged in all the cords, and then we didn’t have any keyboard sound at all. Hm. Oh, switch on compressor. Okay, mike functioning, still no keyboard. The keyboard hasn’t got a status light, but when it’s on the same socket as the sound module, it has to have electricity. Well, it should logically have, but plugging the whole thing into another socket mysteriously worked. Relief.

The next problem: feedback. (You know that loud piercing sound, do you?) This is something I’m familiar with since my voice is quite soft when I’m singing low. Therefore you have to have the mike really loud, and then you have a higher danger of feedback. And then we had the additional problem that the room has marvelous acoustics. Like a natural chorus. The only problem with that is that it’s making amplification tricky. So you ask, why amplify? Well, an electrical keyboard does not sound good without an amp, mine doesn’t even have a speaker of its own. And besides I wanted to record the concert. We literally spent hours checking and putting sheets in front of all the windows and reflecting surfaces, and carpets on the floor. In the end we found out that a major problem was the gleaming surface of the keyboard itself reflecting into the back of the microphone. So I had to play with a woolen shawl on the keyboard. After checking the sound I was spent, nothing was going right and my voice felt weak.

Then change, make up, dinner – hang up laundry.

The three people attending (yes, three, never schedule a concert at the end of July directly before summer break) were quite punctual and after a glass or two of champagne (I told you, you’d miss something.) I started. The recording caused additional problems with set up and PA. During the first songs I was a little tense, but then it got better and better. 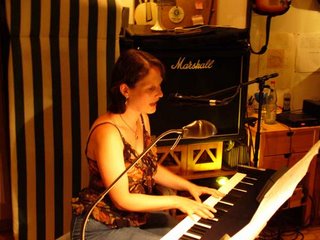 Sadly there where times when the audience was thinking, “Is she gonna make it?” (because of the piano), and that’s not so good. The audience was friendly and attentive, and my son (3 1/2) spent the whole concert sitting or lying on a chair, and didn’t utter a word. Wow! I’d have thought that he would have had enough at the break, but no. And he didn’t even sleep. When I was done, the babysitter put him to bed. The adults kept on talking and were really tired the next morning.

I’m really happy with this concert. This project was my chance to point others to music that I love dearly, all the way working on my performance issues, and get closure on a project. What I learned doing this (apart from the advice never to schedule something for the end of July again) is: 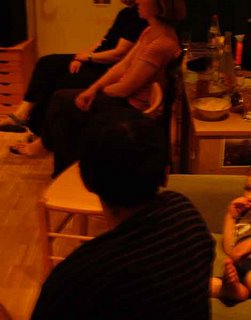 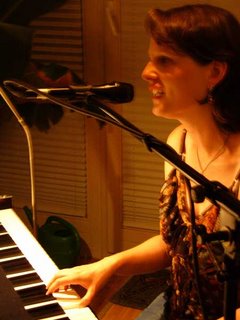 But I’m also seeing that my decision to make a serious commitment to music will eventually elevate me to the next level. Each time that I’m in despair because music requires so much work, I’m seeing that it works the other way round too. When you’re doing the work, you’re getting better. Always. Maybe not instantly, but surely over time.

Addendum: I want to thank my husband too. He freed me of chores so that I could practice and he was my very own personal roadie, mixer, sound engineer and recording engineer.